Notre Dame and the Identity of France, by Charles Hugh Smith

It’s hard to escape the symbolism of Notre Dame burning as French elites reject French culture and French history in favor of the corporatist, globalist nightmare. From Charles Hugh Smith at oftwominds.com:

These are not matters solely of politics and finance; they are manifestations of the elite war on the identity of France.

As rationalists, we’re supposed to take the dramatic and profoundly tragic fire at Notre Dame Cathedral in Paris as random chance or bad luck. But I cannot be the only one who feels a symbolic tie between the near-destruction of a French religious and cultural icon and the embattled identity of France.

As it happens, I am reading Fernand Braudel’s massive two-volume history The Identity of France: Volume One: History and Environment and Volume Two: People and Production.

Longtime readers know I have often recommended Braudel’s three-volume history, Civilization and Capitalism, 15th-18th Century, as essential to the understanding of the rise of Capitalism in Europe:

The Structures of Everyday Life (Volume 1)

The Wheels of Commerce (Volume 2)

The Perspective of the World (Volume 3)

The Chinese famously view natural disasters and similar events as portents of political change, as disasters suggest the Emperor/ruling elite has lost the Mandate of Heaven. It is difficult not to see the disastrous fire in Notre Dame as just such a portent.

For the identity of France is under assault on a number of fronts. The left-leaning status quo has set up a false duality: one either worships multiculturalism and rejects a national identity as the sworn enemy of multiculturalism, or one is a rightist racist. Thus anyone who even refers to a national identity of France is quickly vilified and marginalized.

As Braudel notes at the end of Volume Two, France has long been ruled by tiny elites. A mere 242 financiers held contracts to collect taxes for the monarchy in the early 1700s; Braudel notes that “La Haute Banque in Paris, during the Restoration and later, consisted of a mere 25 families.”

In the highly centralized political power structure of today’s France, the leadership–from Macron down– are all graduates of a few select universities. Like Macron, the leadership was selected early and quickly advanced over lesser elites.

Globalized, hyper-financialized elitist Capitalism, so dependent on cheap immigrant labor for its servants, has left “deep France” behind, stripped of economic and political power, and relegated to dependency on the welfare state in rural regions (only the favored few and those with state-subsidized housing can afford to live in Paris).

These are not matters solely of politics and finance; they are manifestations of the elite war on the identity of France, to transform it into a bland, globalized hierarchy in which capital and power benefit the few, a system enforced by state propaganda and public virtue-signaling.

“The yellow vests movement fits the specific French Left tradition of large public protests targeting the political, more than the business or financial, elites. However, in contrast to the 68’ protests, the yellow vests are much more a movement of France profonde (‘deep France’), its revolt against big metropolitan areas, which means that its Leftist orientation is much more blurred.”

Here is Andrew Joyce (On Yellow Vests and Monsters):

“Amidst the sea of evasions, disavowals, and contradictions, it remains the case that the White working class has been abandoned by both the Old Right and the Left. In some cases, the White working class is the reason for the same evasions, disavowals, and contradictions: they are an uncomfortable, and now more visible, reminder of broken promises and unfulfilled obligations.

Guilluy adds that ‘the economic divide between peripheral France and the metropolises illustrates the separation of an elite and its popular hinterland. Western elites have gradually forgotten a people they no longer see. The impact of the gilets jaunes, and their support in public opinion (eight out of 10 French people approve of their actions), has amazed politicians, trade unions and academics, as if they have discovered a new tribe in the Amazon.’

I disagree that visibility, presented in passive terms, is the key issue here. In fact, I believe a better analogy would be that of an Amazonian tribe that had been systematically targeted for extinction, and was assumed to have been incapable of mustering any kind of resurgence.

Lastly, here is Christophe Guilluy, author of Twilight of the Elites: Prosperity, the Periphery, and the Future of France:

Employment and wealth have become more and more concentrated in the big cities. The deindustrialised regions, rural areas, small and medium-size towns are less and less dynamic. But it is in these places – in peripheral France (one could also talk of peripheral America or peripheral Britain) – that many working-class people live. Thus, for the first time, “workers” no longer live in areas where employment is created, giving rise to a social and cultural shock. … The globalised metropolises are the new citadels of the 21st century – rich and unequal, where even the former lower-middle class no longer has a place. Instead, large global cities work on a dual dynamic: gentrification and immigration. This is the paradox: the open society results in a world increasingly closed to the majority of working people.”

The corporate media, a key defender of the self-serving elite, will reject any symbolism in the near-destruction of Notre Dame. But deep down, many sense what cannot be spoken openly: the elites in France have lost the Mandate of Heaven. 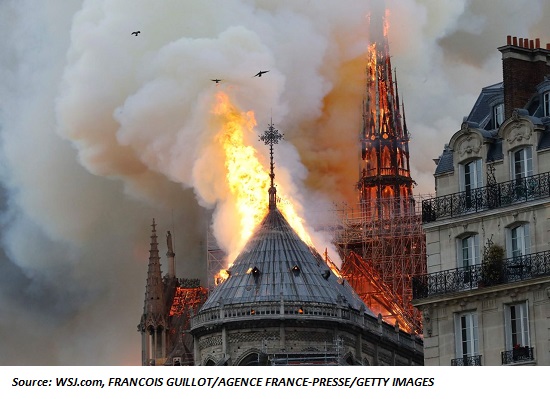 This entry was posted in Government, Investigations, Politics and tagged Notre Dame fire. Bookmark the permalink.