Brazilgate is Turning into Russiagate 2.0, by Pepe Escobar

The situation in Brazil isn’t getting a lot of attention in the US media, but a recent report in The Intercept made people sit up and take notice. From Pepe Escobar at consortiumnews.com:

The Intercept‘s bombshell about Brazilian corruption is being ludicrously spun by the country’s media and military as a “Russian conspiracy,” writes Pepe Escobar

It was a leak, not a hack. Yes: Brazilgate, unleashed by a series of game-changing bombshells published by The Intercept, may be turning into a tropical Russiagate.

The Intercept’s Deep Throat – an anonymous source — has finally revealed in detail what anyone with half a brain in Brazil already knew: that the judicial/lawfare machinery of the one-sided Car Wash anti-corruption investigation was in fact a massive farce and criminal racket bent on accomplishing four objectives.

Moro, side by side with prosecutor Deltan Dallagnol, who was leading the Public Ministry’s 13-strong task force, are the vigilante stars of the lawfare racket. Over the past four years, hyper-concentrated Brazilian mainstream media, floundering in a swamp of fake news, duly glorified these two as Captain Marvel-worthy national heroes. Hubris finally caught up with the swamp.

The Intercept has promised to release all the files in its possession; chats, audio, videos and pics, a treasure trove allegedly larger than Snowden’s. What has been published so far reveals Moro/Dallagnol as a strategic duo in synch, with Moro as a capo di tutti i capi, judge, jury and executioner rolled into one – replete with serial fabrications of evidence. This, in itself, is enough to nullify all the Car Wash cases in which he was involved – including Lula’s prosecution and successive convictions based on “evidence” that would never hold up in a serious court. 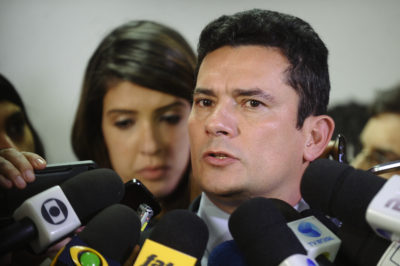 In conjunction with a wealth of gory details, the Twin Peaks principle — the owls are not what they seem — fully applies to Brazilgate. Because the genesis of Car Wash involves none other than the United States government (USG). And not only the Department of Justice (DoJ) – as Lula has been stressing for years in every one of his interviews. The op was Deep State at its lowest.

WikiLeaks had already revealed itfrom the start, when the NSA started spying on energy giant Petrobras and even Rousseff’s smart phone. In parallel, countless nations and individuals have learned how the DoJ’s self-attributed extraterritoriality allows it to go after anyone, anyhow, anywhere.

It has never been about anti-corruption. Instead this is American “justice” interfering in the full geopolitical and geo-economic spheres. The most glaring, recent case, is Huawei’s.

Yet Mafiosi Moro/Dallagnol’s “malign behavior” (to invoke Pentagonese) reached a perverse new level in destroying the national economy of a powerful emerging nation, a BRICS member and acknowledged leader across the Global South.

Car Wash ravaged the chain of energy production in Brazil, which in turn generated the sale – below market prizes – of plenty of valuable pre-salt oil reserves, the biggest oil discovery of the 21stcentury.

Car Wash destroyed Brazilian national champions in engineering and civil construction as well as aeronautics (as in Boeing buying Embraer). And Car Wash fatally compromised important national security projects such as the construction of nuclear submarines,

essential for the protection of the “Blue Amazon”.

For the Council of Americas – which Bolsonaro visited back in 2017 – as well as the Council on Foreign Relations—not to mention the “foreign investors”–to have neoliberal Chicago boy Paulo Guedes installed as finance minister was a wet dream. Guedes promised on the record to virtually put all of Brazil for sale. So far, his stint has been an unmitigated failure.

How to Wag the Dog

Mafiosi Moro/Dallagnol were “only a pawn in their game,” to quote Bob Dylan– a game both were oblivious to.

Lula has repeatedly stressed that the key question – for Brazil and the Global South – is sovereignty. Under Bolsonaro, Brazil has been reduced to the status of a banana neo-colony – with plenty of bananas. Leonardo Attuch, editor of the leading portal Brasil247, says “the plan was to destroy Lula, but what was destroyed was the nation.”

As it stands, the BRICS – a very dirty word in the Beltway – have lost their “B”. As much as they may treasure Brazil in Beijing and Moscow, what is delivering for the moment is the “RC” strategic partnership, although Putin and Xi are also doing their best to revive “RIC”, trying to show India’s Modi that Eurasian integration is the way to go, not playing a supporting role in Washington’s fuzzy Indo-Pacific strategy. 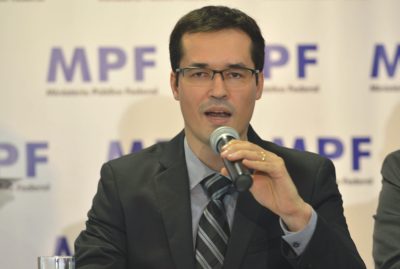 And that brings us to the heart of the Brazilgate matter: how Brazil is the coveted prize in the master strategic narrative that conditions everything happening in the geopolitical chessboard for the foreseeable future—the no-holds-barred confrontation between the U.S. and Russia-China.

Already in the Obama era, the U.S. Deep State had identified that to cripple BRICS from the inside, the “weak” strategic node was Brazil. And yes; once again it’s the oil, stupid.

Brazil’s pre-salt oil reserves may be worth as much as a staggering $30 trillion. The point is not only that the USG wants a piece of the action; the point is how controlling most of Brazil’s oil ties up with interfering with powerful agribusiness interests. For the Deep State, control of Brazil’s oil flow to agribusiness equals containment/leverage against China.

The U.S., Brazil and Argentina, together, produce 82 percent of the world’s soybeans – and counting. China craves soybeans. These won’t come from Russia or Iran – which on the other hand may supply China with enough oil and natural gas (see, for instance, Power of Siberia I and II). Iran, after all, is one of the pillars of Eurasian integration. Russia may eventually become a soybean export power, but that may take as long as ten years.

The Brazilian military knows that close relations with China – their top trade partner, ahead of the U.S. — are essential, whatever Steve Bannon may rant about. But Russia is a completely different story. Vice-President Hamilton Mourao, in his recent visit to Beijing, where he met with Xi Jinping, sounded like he was reading from a Pentagon press release, telling Brazilian media that Russia is a “malign actor” deploying “hybrid war around the world.”

So the U.S. Deep State may be accomplishing at least part of the ultimate goal: to use Brazil in its Divide et Impera strategy of splitting the Russia-China strategic partnership.

It gets much spicier. Car Wash reconditioned as Leak Wash could also be decoded as a massive shadow play; a wag the dog, with the tail composed of two American assets.

Moro was a certified FBI, CIA, DoJ, Deep State asset. His uber-boss would ultimately be Robert Mueller (thus Russiagate). Yet for Team Trump, he would be easily expendable – even if he’s Captain Justice working under the real asset, Bannon boy Bolsonaro. If he falls, Moro would be assured the requisite golden parachute – complete with U.S. residency and talks in American universities.

The Intercept’s Greenwald is now celebrated by all strands of the Left as a sort of American/Brazilian Simon Bolivar on steroids – with and in may cases without any irony. Yet there’s a huge problem. The Intercept is owned by hardcore information-war practitioner Pierre Omidyar.

The crucial question ahead is what the Brazilian military are really up to in this epic swamp – and how deep they are subordinated to Washington’s Divide et Impera.

It revolves around the all-powerful Cabinet of Institutional Security, known in Brazil by its acronym GSI. GSI stalwarts are all Washington consensus. After the “communist” Lula/Dilma years, these guys are now consolidating a Brazilian Deep State overseeing full spectrum political control, just like in the U.S..

GSI already controls the whole intel apparatus, as well as Foreign Policy and Defense, via a decree surreptitiously released in early June, only a few days before The Intercept’s bombshell. Even Captain Marvel Moro is subjected to the GSI; they must approve, for instance, everything Moro discusses with the DoJ and the U.S. Deep State.

As I’ve discussed with some of my top informed Brazilian interlocutors, crack anthropologist Piero Leirner, who knows in detail how the military think, and Swiss-based international lawyer and UN adviser Romulus Maya, the U.S. Deep Stateseems to be positioning itself as the spawning mechanism for the direct ascension of the Brazilian military to power, as well as their guarantors. As in, if you don’t follow our script to the letter – basic trade relations only with China; and isolation of Russia – we can swing the pendulum anytime.

After all, the only practical role the USG would see for the Brazilian military – in fact for all Latin America military – is as “war on drugs” shock troops.

There is no smoking gun – yet. But the scenario of Leak Wash as part of an extremely sophisticated, full spectrum dominance psyops, an advanced stage of Hybrid War, must be seriously considered.

For instance, the extreme-right, as well as powerful military sectors and the Globo media empire suddenly started spinning that The Intercept bombshell is a “Russian conspiracy.”

When one follows the premier military think tank website– featuring loads of stuff virtually copy and pasted straight from the U.S. Naval War College – it’s easy to be startled at how they fervently believe in a Russia-China Hybrid War against Brazil, where the beachhead is provided by “anti-national elements” such as the Left as a whole, Venezuelan Bolivarians, FARC, Hezbollah, LGBT, indigenous peoples, you name it.

After Leak Wash, a concerted fake news blitzkrieg blamed the Telegram app (“they are evil Russians!”) for hacking Moro and Dallagnol’s phones. Telegram officially debunked it in no time.

Then it surfaced that former president Dilma Rousseff and the current Workers’ Party president Gleisi Hoffmann paid a “secret” visit to Moscow only five days before the Leak Wash bombshell. I confirmed the visit with the Duma, as well as the fact that for the Kremlin, Brazil, at least for the moment, is not a priority. Eurasian integration is. That in itself debunks what the extreme-right in Brazil would spin as Dilma asking for Putin’s help, who then released his evil hackers.

Leak Wash – Car Wash’s season two – may be following the Netflix and HBO pattern. Remember that season three of True Detective was an absolute smash. We need Mahershala Ali-worthy trackers to sniff out patches of evidence suggesting the Brazilian military – with the full support of the U.S. Deep State – might be instrumentalizing a mix of Leak Wash and “the Russians” Hybrid War to criminalize the Left for good and orchestrate a silent coup to get rid of the Bolsonaro clan and their sub-zoology collective IQ. They want total control – no clownish intermediaries. Will they be biting more bananas than they can chew?

Pepe Escobar, a veteran Brazilian journalist, is the correspondent-at-large for Hong Kong-based Asia Times. His latest book is “2030.” Follow him on Facebook.