But US “Energy Independence” is More Complicated, by Wolf Richter

The US Becomes Net Exporter of Crude Oil & Petroleum Products for First Time.

The US has exported petroleum products – gasoline, diesel, heating oil, naphtha, propane, etc. – for a long time. This is the business some refineries are in. They buy crude oil from wherever they can get it, including other countries, and sell refined product to customers in the US and other countries.

For example, California produces some crude oil and gets some crude oil by tanker from Alaska and some by oil train across the Rockies. But there is no oil pipeline across the Rockies. So refineries in California, including in the San Francisco Bay Area, also import some of their crude oil from other countries, refine it, and then sell gasoline, diesel, and other petroleum products to other countries largely in Latin America.

Texas, the largest oil-producing state in the US, faces a still more complex landscape, with its enormous crude-oil production, its large refinery operations, pipelines connecting oil producers in the state to refineries in other states, and its import and export terminals, via which it both imports and exports various grades of crude oil and all kinds of petroleum products, depending on market conditions and other factors.

In other words, some of the crude oil that the US imports is then re-exported as value-added finished petroleum products, such as motor gasoline and diesel. 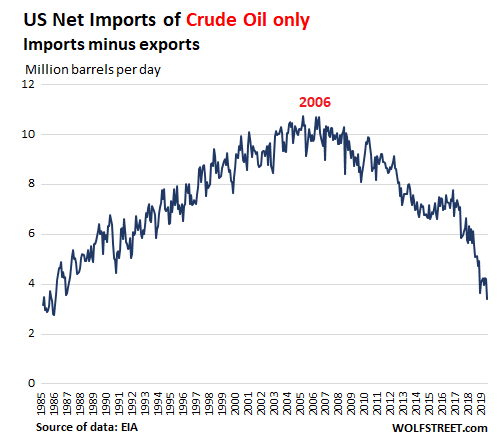 But “energy independence” is more complicated.

The US market is tightly interwoven with global markets, in numerous aspects. For example, unless a pipeline appears out of nowhere across the Rockies, the West Coast will continue to import foreign crude oil. Hauling crude oil via oil train across the Rockies is risky and expensive, and while this is being done to some extent, the added transportation cost renders this oil a difficult business proposition; and the risks of oil trains have engendered a lot of resistance in populated areas that the oil trains have to go through.

Then there are the various grades of crude oil and various petroleum products that are being produced and refined in the US and around the world, and it makes economic sense to trade with other countries – importing some and exporting others – to balance out the supply and demand equation around the world. So the US remains dependent on the global market, at least in normal times.

But the US cannot be blackmailed anymore over oil.

If another oil embargo came along, the US would just shrug it off, and when the price of oil rises due to this embargo, US drillers would ramp up production and within months, the world would be awash in US oil. In other words, the US cannot be blackmailed anymore over oil – the way it used to. And the world knows it. And that’s a form of independence.

The glut and the costs of shale oil.

As a result of this production boom in the US, the price of crude oil started to collapse in mid-2014. Today, at $55 per barrel of WTI, it remains about half of where it had been before the oil bust in early 2014.

US shale oil drillers are among the high-cost producers. They need a high oil price in order to sustain their businesses. You’d think that the collapse in the price of oil would have curtailed production, and it did briefly in 2015 and 2016 – see the dip in the chart above – but then new money started to pour into the sector, in the hope that prices would rise again, and they did, only to re-collapse late last year. But shale oil drilling is not sustainable at these prices, and investors are losing their shirts.

In 2019 so far, at least 33 oil and gas drillers in the US have filed for bankruptcy. Since January 2015, over 200 have filed for bankruptcy. Others are now jostling for position at the bankruptcy filing counter. Investors who’ve jumped into this in 2016, thinking they’d picked the bottom, have grabbed falling knives, and their fingers have gotten sliced off, including those of fracking billionaires. Read… Fracking Blows Up Investors Again: Phase 2 of the Great American Shale Oil & Gas Bust

One response to “But US “Energy Independence” is More Complicated, by Wolf Richter”