Since Biden took office his administration has done everything possible to hinder the production of oil and natural gas. However, with rising oil and gas prices part of a generalized trend that will cost Democrats dearly this November, all of a sudden the administration wants producers to produce full speed ahead. From Tyler Durden at zerohedge.com:

It was just last June when we asked if “ESG will trigger energy hyperinflation“, explaining that the progressives’ ESG agenda, “is unwinding the shale oil revolution. As recent events at Exxon and Shell have shown, the pressure on oil companies to reduce oil and gas exploration and adapt their business models has increased significantly over the past few months” (incidentally the answer to our rhetorical question was “yes”).

We added that “ESG is a negative supply shock that internalizes the climate cost of the production of goods and services. This negative supply shock will be inflationary until technological progress absorbs these costs. That could take years.  Moreover in Europe, it could garner enough of political support to justify a more aggressive fiscal policy despite the constraints at the German or EU levels.”

Meanwhile, the impact of ESG on oil companies has been to depress Capex spending to the lowest level in decades, leaving the energy sector entirely unprepared for any energy price spike, as it simply did not have the capacity to pump as much oil as may be needed.

How The Shale Revolution Saved Europe from a Great Blackout, by Daniel Lacalle

American shale oil is filling in the European green energy gap. From Daniel Lacalle at dlacalle.com:

In October, the governments of Austria and The Netherlands warned of the risk of a “great blackout”. Soaring natural gas prices, lack of security of supply and a challenging outlook of pipeline deliveries from Russia made the governments exceedingly nervous about the chances of providing cheap and reliable energy for homes in winter.

However, an unexpected ally has prevented an energy crisis in Europe and, ironically, it is an ally that was banned in most European nations: Shale gas.

About half of the record U.S. Liquefied Natural Gas volumes shipped in December 2021 went to Europe, up from 37% earlier in 2021, according to the U.S. Energy Information Administration.

While most European nations banned the exploration and development of domestic natural gas resources many years ago, the United States has plenty and competitive supplies thanks to the shale oil and gas revolution, which has made the country almost energy independent. Domestic natural gas production has exceeded U.S. demand by about 10%, according to Reuters.

There is a lesson for the U.S. here. Many European energy policies have been ideologically directed, and massive energy subsidies and political intervention have not strengthened the competitiveness of the economy, secured energy supply, or even reduced significantly carbon emissions.

Game Over for Oil, The Economy is Next, by Art Berman

Most people don’t realize what a huge role the oil industry plays in the US economy. From Art Berman at artberman.com:

It’s game-over for most of the U.S. oil industry.

Prices have collapsed and storage is nearly full. The only option for many producers is to shut in their wells. That means no income. Most have considerable debt so bankruptcy is next.

Peggy Noonan wrote in her column recently that “this is a never-before-seen level of national economic calamity; history doesn’t get bigger than this.” That is the superficial view.

Coronavirus has changed everything. The longer it lasts, the less the future will look anything like the past.

Most people, policy makers and economists are energy blind and cannot, therefore, fully grasp the gravity or the consequences of what is happening.

Energy is the economy and oil is the most important and productive portion of energy. U.S. oil consumption is at its lowest level since 1971 when production was only about 78% of what it was in 2019. As goes oil, so goes the economy…down.

The old oil industry and the old economy are gone. The energy mix that underlies the economy will be different now. Oil production and price are unlikely to regain late 2018 levels. Renewable sources will fall behind along with efforts to mitigate climate change.

Black Swans, Dead Cats, Live Bats, and Goodbye to All That, by James Howard Kunstler

Had enough excitement yet? At least the stock markets are following an established script: the bubble pops, the elevator drops, for a while it stops… and then investments sink to the deepest sub-basement, where they linger for a long, long time. Hello, next great depression…. We know how that story goes, even if it hurts.

This corona virus is something else. It engulfs whole populations in a fog of confounding narratives. Is it no worse than a bad common cold, except for old folks already half-gone with chronic illness? Or does it really slam people even in the midst of life? Well, Wuhan hospital director Liu Zhiming, 51, went down two weeks ago, and gastroenterologist Xia Sisi, 29, and Dr. Peng Yinhua, also 29, and some prominent Iranian politicians, and lots of very sick healthcare workers from Korea to Italy. Whatever corona virus is, I’m not persuaded that it’s a hoax.

END_OF_DOCUMENT_TOKEN_TO_BE_REPLACED

There is carnage in the oil patch. From Wolf Richter at wolfstreet.com:

Shares of shale oil drillers collapsed by 25%-50% today. Their bonds got massacred. Saudi-Russia price-war strategy appears successful in wiping out investors in the US shale-oil sector.

It was so chaotic and brutal in the crude oil market today that the EIA, which is part of the US Department of Energy, emailed out this statement: “We have delayed the release of the Short-Term Energy Outlook to allow time to incorporate recent global oil market events. The outlook will now be released Wednesday, March 11, at 9:00 a.m.”

Shares of Occidental Petroleum, which is heavily involved in US shale oil and gas, collapsed by 53% today to $12.51. They’re down 85% since October 2018, when phase two of the Great American Oil Bust set in, with phase one having commenced in July 2014: 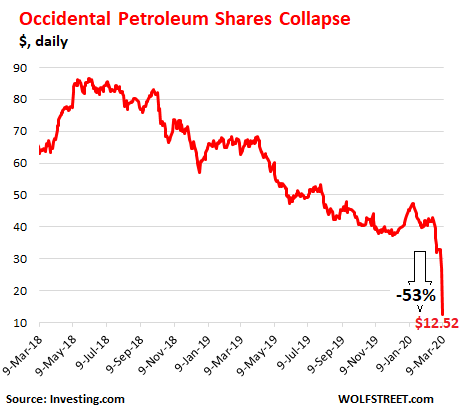 Oxy’s bonds – those that even traded – collapsed today. For example, this $750 million 30-year senior unsecured bond, with a coupon interest of 4.1%, closed on Friday at 92.5 cents on the dollar. Like many bonds, they don’t trade much, but are stuck in bond funds or held by institutional investors, and it’s hard to sell them because there are not many buyers.

END_OF_DOCUMENT_TOKEN_TO_BE_REPLACED

Meet The Biggest Losers Of The U.S. Shale Bust, by Anes Alic

After a decade of unprecedented growth and seemingly endless investments, the writing is now on the wall: the Great American Shale Boom is slowing down and this could have some grave consequences both the industry and the financial markets.

A total of 32 oil and gas drillers have filed for bankruptcy through the third quarter, with the total number of bankruptcy filings since 2015 now clocking in at more than 200.

Unlike Phase 1 of the oil bust that featured shale production declining due to an epic global price collapse, the current slowdown is being driven partly by industry-wide core operational issues, including declining production due to wells being drilled too close to one another as well as production sweet spots running out too soon.

Yet, the most important underlying theme precipitating the collapse is a growing financial squeeze as banks and investors pull in the reins and demand that shale drillers prioritize profitability over production growth.

The shale industry has been built on mountains of debt and the day of reckoning is finally here.

END_OF_DOCUMENT_TOKEN_TO_BE_REPLACED

But US “Energy Independence” is More Complicated, by Wolf Richter

The US Becomes Net Exporter of Crude Oil & Petroleum Products for First Time.

The US has exported petroleum products – gasoline, diesel, heating oil, naphtha, propane, etc. – for a long time. This is the business some refineries are in. They buy crude oil from wherever they can get it, including other countries, and sell refined product to customers in the US and other countries.

END_OF_DOCUMENT_TOKEN_TO_BE_REPLACED

The Drilling Frenzy Is Over For U.S. Shale, by Nick Cunningham

The shale patch will not be making much of a contribution to economic expansion over the course of the next few years. From Nick Cunningham at oilprice.com:

A few high-profile shale executives say the glory days of shale drilling are over.

In a round of earnings calls, the financial results were mixed. A few companies beat earnings estimates, while others fell dramatically short.

But aside from the individual performances, there were some more newsworthy comments from executives on the state of the industry. A common theme emerged from several notable shale executives: the growth frenzy is coming to an end.

The chief executive of Pioneer Natural Resources, Scott Sheffield, said that the Permian basin is “going to slow down significantly over the next several years,” and he noted on the company’s latest earnings call that the company is also acting with more restraint because of pressure from shareholders not to pursue unprofitable growth. “I’ve lowered my targets and my annual targets, a lot of it has to do with…to start with the free cash flow model that public independents are adopting,” Sheffield said.

END_OF_DOCUMENT_TOKEN_TO_BE_REPLACED

More and amplified weirdness is coming. From James Howard Kunstler at kunstler.com:

The Golden Golem of Greatness shifted into mad bull overdrive for last night’s Minneapolis fan rally, cussing and bellowing at the picadors of the Left who have been sticking lances in his neck for three years. Decorum is not Mr. Trump’s strong suit, but then the bull is not sent into the ring to negotiate politely for his life. The narrative of the bullring is certain death. The bull must do what he can within his nature to dispute it.

It’s in Mr. Trump’s nature to act the part of a reality TV star, and, of course, it is the nature of reality TV shows to be unreal. That is perhaps the ruling paradox of life in the USA these days. Saturated in unreality, the spectators (also called “voters”) flounder through a relentless barrage of narratives aimed at confounding them, with the unreal expectation that they can make sense of unreal things. In a place like Minneapolis of an October evening, you can go see the Joker movie or take in the President’s rally — and come away with the same sense of hyper-unreality. We’re no longer the nation we pretend to be and we don’t know it. Jokers are wild and the joke’s on us.