US Default Bomb Goes Off: 2020 Will Have A Record Number Of Large Corporate Bankruptcies, by Tyler Durden

Don’t tell the stock market about the impending bankruptcies. From Tyler Durden at zerohedge.com:

The disconnect between the all time highs in the stock market and the broader economy has never been greater (with even Janet Yellen, one of the main architects of this disconnect, agreeing), and one of the places where this chasm is most glaring, is in the staggering number of major corporations filing for bankruptcy in 2020. Indeed, this year large US corporate bankruptcy filings are running at a record pace and are set to surpass levels reached during the financial crisis in 2009 (when the S&P was far from an all time high).

According to FT calculations, as of August 17, a record 45 companies each with more than $1 billion in assets has filed for Chapter 11 this year; this compares with 38 for the same period of 2009 during the depths of the financial crisis and is more than double last year’s figure of 18 over the comparable period. 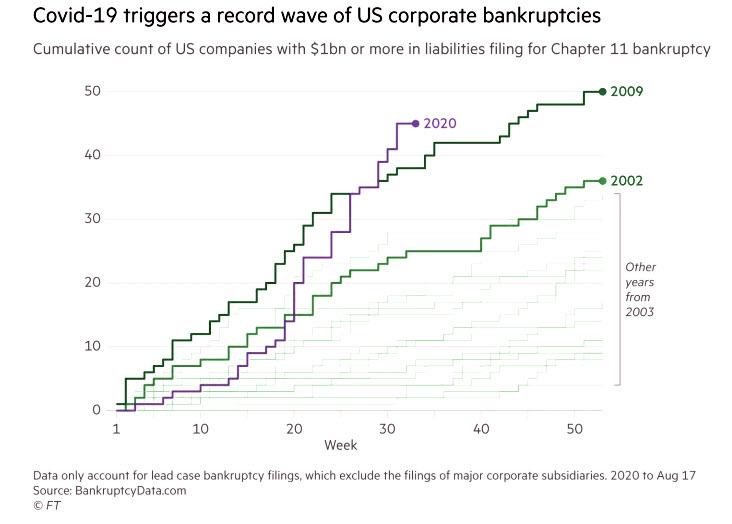 In total, 157 companies with liabilities over $50 million have filed for Chapter 11 bankruptcy this year and as we warned several months ago, many more are coming.

“We are in the first innings of this bankruptcy cycle. It will spread far across industries as we get deeper into the crisis. It’s going to be a bumpy ride,” said Ben Schlafman, chief operating officer at New Generation Research.

The spike in bankruptcies comes despite trillions of dollars in government aid to mitigate the fallout of the coronavirus pandemic on businesses, highlighting the catastrophic and lasting impact Covid-19 is having on the US economy. Or perhaps those trillions in government aid are going to the wrong recipients, and as a result companies that stand to benefit from mass defaults are now sporting record market caps. In fact, the irony is that in its pursuit to crush monopolies such as Amazon and Google, the government has made them bigger and stronger than they have ever been.

Meanwhile, with the US economy driving right over the fiscal cliff as Congress failed to extend emergency covid benefits, sending spending by those receiving Unemployment Insurance sharply lower…

This entry was posted in banking, Business, Economy, Government and tagged Corporate bankruptcies. Bookmark the permalink.