Record Numbers Of Companies Drown In Debt To Pay Dividends To Their Private Equity Owners, by Tyler Durden

One day many of the practices described in this article will be illegal. From Tyler Durden at zerohedge.com:

One week ago we used Bloomberg data to report that in the latest Fed-fuelled bubble to sweep the market, now with Powell buying corporate bonds and ETFs, private equity firms were instructing their junk-rated portfolio companies to get even deeper in debt and issue secured loans, using the proceeds to pay dividends to owners: the same private equity companies. Specifically, we focused on five deals marketed at the start of the month to fund shareholder dividends, which accounting for half of the week’s volume, and the most in a week since 2017, according to Bloomberg.

Now, a little over a week late, the FT is also looking at these dividend recap deals which have become all the rage in the loan market in recent weeks, among other reasons because they are “ringing alarm bells since they come on top of already high leverage and weak investor protections and against a backdrop of economic uncertainty.”

Having updated our calculation, the FT finds that in September a quarter (24% to be exact) of all new money raised in the US loan market has been used to fund dividends to private equity owners, up from an average of less than 4% over the past two years: that would be the highest proportion since the beginning of 2015, according to S&P Global Market Intelligence. 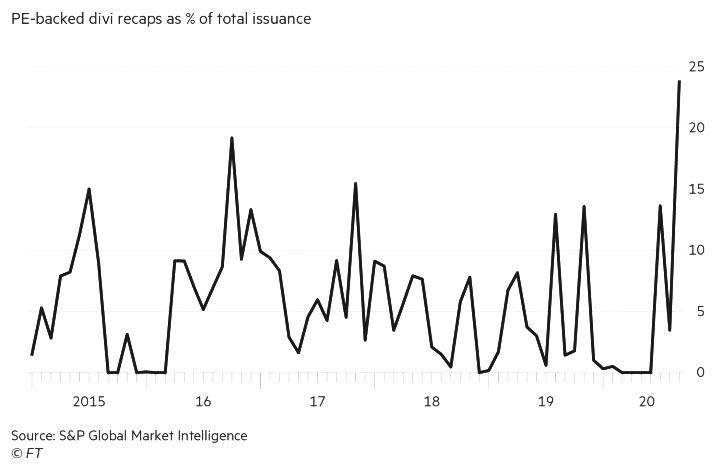 As we wrote a little over a week ago, while the loan market — where PE firms fund the companies they own by selling secured first, second, third and so on lien debt — had until recently not seen the same volume of issuance as other parts of the financial markets. That changed after the Fed stepped into the corporate bond market sending yields crashing to record lows, and forcing US investors into the last corner of the fixed income world to still offer some modest yields: leveraged loans. And since this is the domain of PE firms which desperately need to extract as much cash as they can from their melting ice cubes (another names for single-B and lower rated portfolio companies which will likely all be broke in the next 3-5 years), everyone is rushing to market with dividend recaps to pay as much to their equity sponsor as they can before the window is shut again.