Goldman Warns If The Short Squeeze Continues, The Entire Market Could Crash, by Tyler Durden

Goldman Sachs doesn’t like rigged markets if their not the ones doing the rigging. From Tyler Durden at zerohedge.com:

Last Friday (Jan 22) we advised readers who thought they had missed the move in Gamestop (they hadn’t), to position appropriately in the most shorted Russell 3000 names which included such tickers as FIZZ, DDS, BBBY, AMCX, GOGO and a handful of other names, as it was likely that the short-squeeze was only just starting.

We were right and all of the stocks listed above – and others – exploded higher the coming Monday, and all other days of the week, with results – encapsulated by the WallStreetTips vs Wall Street feud – that have become the only topic of conversation across America (remember the Trump impeachment?), while on WSB the only topic has been the phenomenal gains generated by going long said most shorted stocks. To wit, the basket of top shorts we compiled on Jan 22 has tripled in the past week. 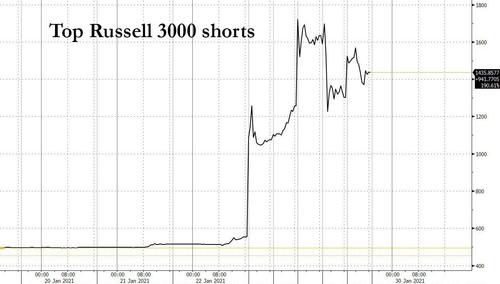 And while some are quick to blame last week’s fireworks on the “dopamine rush” of traders at r/wallstreetbets who seek an outlet to being “copped up with little else to do during the pandemic” (as Bloomberg has done, while also blaming widespread lockdowns and forgetting that it has been Bloomberg that was among the most vocal defenders of the very lockdowns that have given us the short squeeze of the century), the reality is that at the end of the day the strategy unleashed by the subreddit is merely an extension of the bubble dynamics that were made possible by the Federal Reserve (of which Bloomberg is also a very staunch fan) pumping trillions and trillions of shotgunned liquidity into a financial system where there are now bubble visible anywhere one looks. In short, main street finally learned that it too can profit from the lunacy of the money printers at the Marriner Eccles building, and some are very unhappy about that (yes, it will end in tears, but – newsflash – $300 trillion in debt and $120BN in liquidity injections monthly will also end in tears).