Rothbard Explains How to Recover from an Economic Crisis, by Anthony Mueller

Recovery is easy, governments should just do the exact opposite of what they do now under the misguided tutelage of Keynesian economy advisors. From Anthony Mueller at lewrockwell.com:

Confronted with a severely weakened economy as the consequence of the policy-ordered lockdowns, governments now get ready to apply another severe blow to the economy. The favorite means is more deficit spending. In the United States, President Biden announced a stimulus program amounting to $1.9 trillion. This amount would enter an economy that is already flush with liquidity. During the past twelve years, the American central bank has expanded its balance sheet in three major boosts, first from $900 billion in July 2008 to $2.1 trillion in November 2008, then from $2.8 trillion in November 2012 to $4.5 trillion in November 2014, and, finally, from $3.8 trillion in September 2019 to $7.6 trillion in February 2021.

This monetary expansion has not yet led to a significant rise in the price level, because during this period the velocity of monetary transactions (GDP/M1) has fallen from a factor of 10.6 in the fourth quarter of 2007 to 3.5 in the fourth quarter of 2020. The effect of monetary inflation has not yet shown up in the prices of goods of services but lifted has the prices of financial assets and real estate. 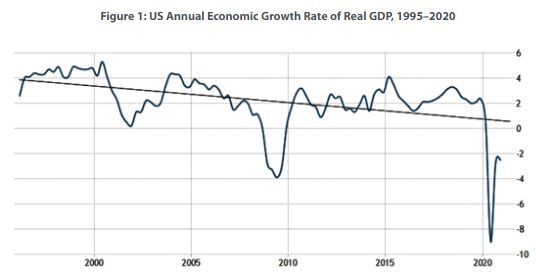