Good luck cracking down on ghost guns. From Tyler Durden at zerohedge.com:

A couple of months ago, we noted deputies in a North Carolina drug raid seized cocaine, psilocybin mushrooms and marijuana, money, and a Glock 19 disguised as a Nerf toy gun. We weren’t quite sure if the seizure of the pistol, made to look like a harmless children’s gun, was an anomaly, but it appears today people are 3D-printing weapons that resemble Nerf guns.

Case in point, Twitter account “YoungBreezy” has printed a working 3D-printed gun that looks exactly like a Nerf gun. The weapon has a similar color scheme and even the Nerf logo printed on the side.

YoungBreezy appears to have taken the 3D-printed weapon to a range where he ran through an entire clip without the gun failing.

Never had a nerf blaster growing up, so I made my own.
Thanks @NaviGoBoom @CtrlPew pic.twitter.com/1vMG6pzWyL

He said, “What it looked like before. Muzzle thing (not a suppressor) and brace broke off. Had a couple of failures to extract, and towards the end, the trigger wasn’t resetting reliably. Other than that, the test went well. Bolt didn’t break this time, and it was pretty consistent.” 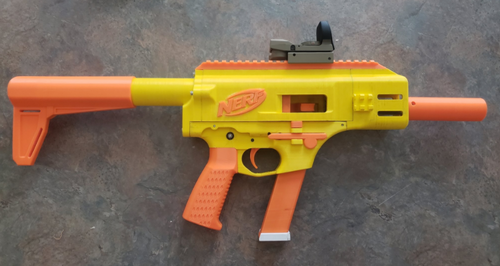