The big eco dilemma: How rare earth metals have become a thorn in the side of the green agenda, by Brendan Heard

Many green technologies depend on decidedly ungreen rare earth metals. From Brendan Heard at rt.com: 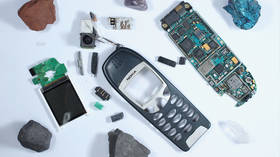 A stripped down mobile phone and mobile phone parts lie on a table with minerals representing substances typically found in a mobile phone. © Sean Gallup/Getty Image
The world is getting ever more reliant on rare earth metals as it eyes a more environmentally friendly future. And this is a problem, because we don’t have enough of them and they are massively polluting to process.

You may not be aware of the significance of rare-earth metals (or rare-earth elements) but you should be. They are a specific set of 17 extremely similar heavy metals, and are integral to modern electric and electronic technology, specifically renewable energy, computers, lasers, glass, magnets and various industrial processes.

But they do not come without problems. Their extraction, processing and refining are having major geo-political repercussions, and there is also their slow depletion, combined with careless, wasteful disposal (in our era of planned obsolescence) to consider.

Nevertheless, our usage of rare-earth metals continues to rise, even as their sourcing grows more dubious, creating an environmental catastrophe of horrific proportions.

What makes the conundrum more pressing is their widespread use in so-called green technology. A brief list of some of the items which require them gives you an indication of their significance. For example, they are used in magnets, batteries, catalytic converters, motors, turbines, medical devices, smart phones, power tools, camera lenses, laptops, wind turbines, electric or hybrid cars, x-ray machines, and guided missiles, to name a few. Even a single iPhone contains eight different rare earth metals.