The Rogue Food Movement Is Gaining Ground, by Ginny Garner

Grocery-store food won’t kill you, at least not right away, but there are better ways to eat. From Ginny Garner at lewrockwell.com:

“We’re gonna storm the gates. They just don’t know it yet.” – Joel Salatin

How do you circumvent the centralized food system and government and achieve food independence for yourself and your community? Several hundred food and health freedom enthusiasts travelled from across the US to gather at the Rogue Food Conference at the world renowned regenerative Polyface Farm on August 14 to find out. These rogues and apprentice rogues believe they have the right to grow, eat and sell food without interference from the government. Speakers – many of whom have found themselves behind bars due to challenging bureaucrats and politicians – talked about how there is strength in numbers; how to use creative circumvention and tactics; how banding together and supporting each other as a community is the key to victory; and the community building constructs including food churches, buying clubs, and other local food approaches. And any Polyface gathering is going to include delicious nutrient-dense food grown on the farm – fresh fruit, eggs, sausage links and coffee for breakfast and BBQ chicken and salad for lunch – which energized everyone to listen, learn, network and soak in the beautiful landscape of the mountains and the Shenandoah Valley.

Polyface co-owner Joel Salatin kicked off the gathering with a reading of Milton Mayer’s somber “They Thought They Were Free: The Germans 1933-45,” Chapter 13 “But Then It Was Too Late.” Attentive listeners recognized the unmistakable eerie historical comparison with today’s threatening Covid/Great Reset technocrats attempting to tyrannize America – indeed the world.

Those passionate about food freedom and health independence are a growing grassroots community who are disengaging families, livelihoods, and money from the system. They oppose the planned global technocratic tyrannical agenda of multiple forced toxic shots. These freedom lovers do not want their movement to be tracked and traced where every element of a sovereign free life is rewarded or punished, denied or granted based on a social credit score. “We are here early to defend personal responsibility,” said Salatin. “There is so much talent and heart in this movement. We are creating an alternate universe. This is the remnant. This is our tribe.” He announced plans to take future rogue food events on the road and offered Polyface as a venue for future gatherings for like-minded groups if they find themselves shut out of other locations. 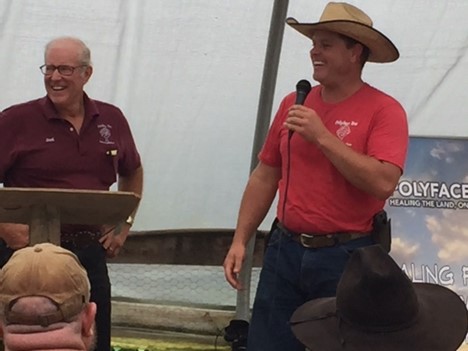