The car companies’ chip crisis wouldn’t be nearly as severe if cars didn’t have so many unnecessary chips. From Eric Peters at ericpetersautos.com:

The trade publication Automotive News reports that new car buyers are “losing patience” with the dearth of new car inventory caused by the dearth of new “chips” needed to run the systems all new cars are afflicted with.

This problem could be solved at a stroke – by building cars again, rather than very pricey (and very disposable) mobile phones. 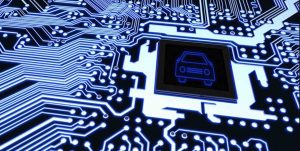 The very first “chips” were simple – and local. They were transistorized modules that began to replace mechanical ignition contact points within the distributor that timed and transmitted the spark that fired the air-fuel mixture within the engine’s cylinders.

This made ignition systems more reliable and greatly reduced the need for regular maintenance, since it was no longer necessary to regularly check and adjust the clearance between the contact points – or replace the points when they wore beyond specification. Some people lamented the passing of points into the history books (along with road draft tubes) but, on balance, the changeover was a clear boon for most people.

This entry was posted in Business, Government, Technology and tagged Automobile industry, Semiconductors. Bookmark the permalink.