Buffet is probably trustworthy buying back Berkshire stock. The company has a mountain of cash so it’s not borrowing. Buffet is an excellent judge of value, and presumably that extends to the value of his own company. The rest of the buyback queens, make sure you check under the hood, especially if the company is borrowing money for its buybacks. From Wolf Richter at wolfstreet.com:

They’re back big time. Three of the big four banks are back – while Wells Fargo keeps getting slapped on the wrist – after all four were out of it last year due to pandemic-rated financial restrictions. Intel fell out of it. But the rest of Big Tech is in, and Apple bigger than ever. Warren Buffett’s Berkshire Hathaway, after rightfully dissing share buybacks for years, has become one of the largest share buyback queens. And Charter Communications has jumped into it massively.

The top 10 companies – ranked by their cumulative buybacks over the past five years – bought back more of their shares than ever in Q2: $85 billion, according to S&P Dow Jones Indices this week, accounting for 43% of the total share buybacks by all S&P 500 companies. Since 2014, these 10 companies bought back $1.13 trillion of their own shares.

The two surges in the chart below – first after the corporate tax cuts in 2017, and second after Q2 2020 – quadrupled the quarterly rate of share buybacks for these 10 companies from around $20 billion a quarter in the four years through 2017, to $85 billion in Q2 (data via YCharts.com): 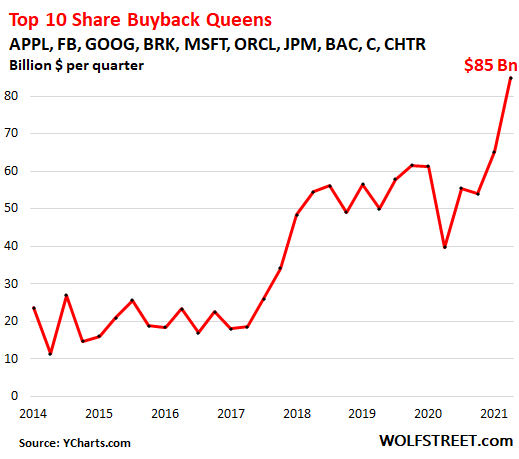