What began as an NBC reporter’s attempt to suggest NASCAR fans shouting “F@ck Joe Biden” were actually saying “Let’s go Brandon!” – has been a viral sensation for a month and a half.

Fans at football stadiums across the country have chanted “F@ck Joe Biden” to voice their discontent with the president.

The speed at which “Let’s Go Brandon,” a coded vulgar insult towards the president, has spread throughout stadiums and social media has been astonishing.

“F@ck Joe Biden” or “FJB” for short has also made it to the sky. On Nov. 10, a pilot operating a Cessna commuter plane with the tail number “N23508” was recorded by flight-tracking website FlightAware. What’s unique about this plane’s flight route is that the pilot drew FJB and a middle finger. 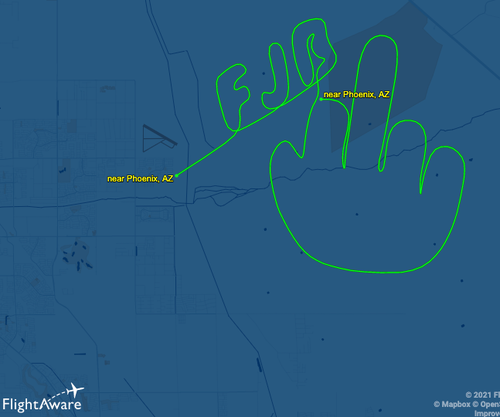 This entry was posted in Humor, Politics and tagged FJB. Bookmark the permalink.