With all the boarded windows, San Francisco looks like a hurricane just passed through. From Tyler Durden at zerohedge.com:

San Francisco is spiraling out of control amid a massive wave of “smash-and-grab” gangs targeting retail stores. Progressives have transformed the metro area into a liberal hell-hole of surging violent crime. Retail thefts have dramatically increased due to the recent passage of ‘Proposition 47,’ which lowers the penalty for theft.

By now, readers are well familiar with nearly two dozen Walgreens stores in San Francisco that have closed up shop due to the high rate of thefts (read: here & here).

Lately, organized crime gangs have been targeting ultra-luxury retailers, such as Louis Vuitton stores. There was also an eighty-person flash mob that looted a Nordstrom in the Bay Area last week.

As a result of all the looting and failed progressive leadership doing nothing about the smash-and-grab crimes, retailers have taken things into their own hands by boarding up windows and doors. 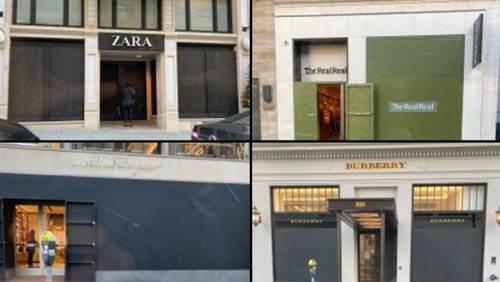 One response to “Stunning Images Reveal Downtown San Francisco Is Boarded Up Amid Mass Looting, by Tyler Durden”