Video: Ted Cruz Apologises For Calling Jan 6th A ‘Terrorist Attack’; It Was “Sloppy” And “Dumb”, by Steve Watson

Ted Cruz belatedly realizes that you can’t call the participants in the Capitol protests “terrorists” without pissing off a lot potential voters. From Steve Watson at summit.news: 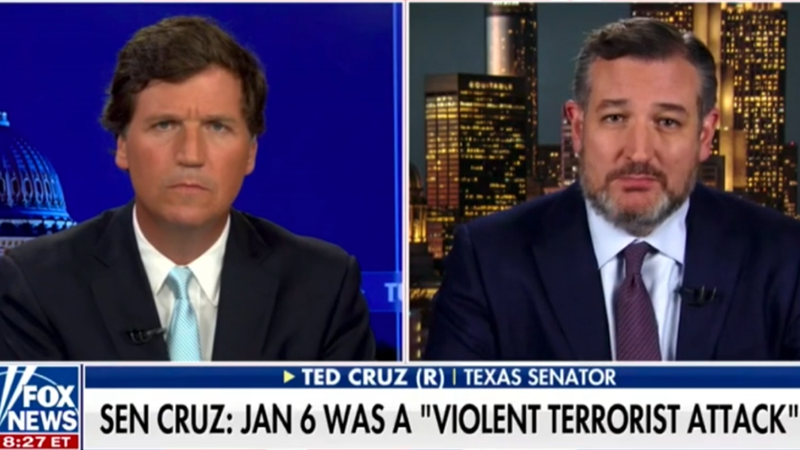 After encountering a huge backlash from conservatives for describing the events of January 6th 2021 as a “violent terrorist attack,” Senator Ted Cruz apologised and admitted that his language was “dumb” and “sloppy”.

Cruz appeared on Tucker Carlson’s evening show Thursday, apparently at his own request, and attempted to back track on what he said, claiming that he’d been referring to attacks on police.

Carlson said to Cruz “There are a lot of dumb people in the Congress. You are not one of them. I think you’re smarter than I am. And you never use words carelessly. And yet you called this a terror attack when by no definition was it a terror attack. That’s a lie. You told that lie on purpose, and I’m wondering why you did.”

Cruz responded “When you aired your episode last night, I sent you a text shortly thereafter and said listen, I would like to go on because the way I phrased things yesterday, it was sloppy, and it was frankly dumb.”

Carlson interjected, urging “Look, I’ve known you a long time. Since before you went to the Senate, you’re a Supreme court contender. You take words as seriously as any man who’s ever served in the Senate. And every word you repeated that phrase. I do not believe that you use that accidentally. I just don’t.”

2 responses to “Video: Ted Cruz Apologises For Calling Jan 6th A ‘Terrorist Attack’; It Was “Sloppy” And “Dumb”, by Steve Watson”