Partition is a good idea, but it would still leave open the questions of NATO membership and Western weaponry in the western portion of Ukraine. That would have to be resolved in Russia’s favor. From David Stockman at antiwar.com:

A wise observer once cautioned about the danger of overthinking matters. That is, sometimes per Occam’s Razor the right answer is the most direct, obvious and simple one; and that certainly applies in spades to the unfathomable mystery of how Washington got itself to the brink of war with the world’s only nuclear power with an arsenal equivalent to America’s.

The answer is 37% favorables versus 55% unfavorables!

That’s the worst presidential approval score for this stage of the game in modern history, and it is also the approximate reason why the world is on the brink of WWIII. 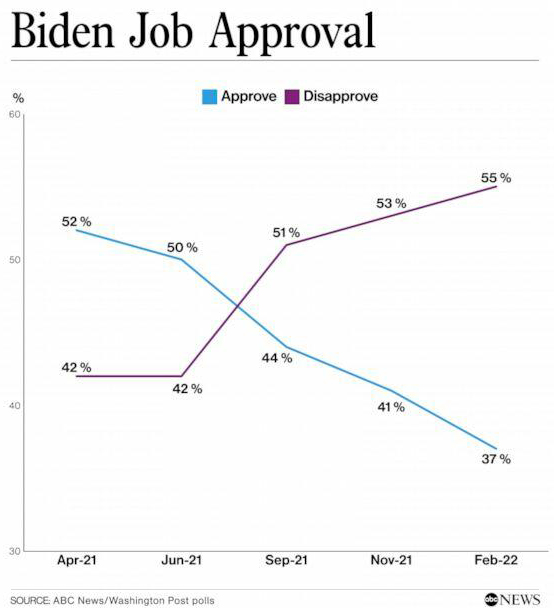 Indeed, nothing has plunged like Biden’s approval line above since Tricky Dick’s sky-dive during the course of 1973 as the ugly details of Watergate made their way into the public domain.

So, yes, this is Wag the Dog 2.0, but it’s not a movie: These fools are conducting a live fire drill and pushing the world closer to the brink of nuclear Armageddon than it’s been since the Cuban Missile Crisis of October 1962.

Moreover, the comparison is about as apt as it gets. President John Kennedy rightly said no Soviet missiles in our backyard 90-miles away. Yet the prospect of American missiles hard upon a prospective NATO-Ukraine/Russian border is self-evidently what led to Putin’s desperate attack.