Notice that water deliveries aren’t being cut to democrat-controlled California. Perhaps the price of water should be allowed to rise in the Golden State to the point where desalination becomes economical. The state does sit next to an ocean. From Tyler Durden at zerohedge.com:

Arizona and Nevada face deeper cuts on the amount of water they can draw from the drought-stricken Colorado River, the Interior Department’s Bureau of Reclamation said Tuesday.

The agency responsible for managing water and power in the western US said “urgent action” is needed as water levels in the Colorado River’s two largest reservoirs — Lake Mead and Lake Powell — continue to drop. Under the new conservation efforts, 21% of Arizona’s annual water allocation from the river system will be reduced in 2023.

Nevada will see 8% of water deliveries reduced, and Mexico’s share will be cut by 7%. California will be spared from the new measures that begin next year.

The reductions could be the beginning of a water crisis for the 40 million Americans in seven states (Colorado, New Mexico, Utah, Wyoming, Arizona, California, and Nevada) that heavily rely on the river for freshwater and power. 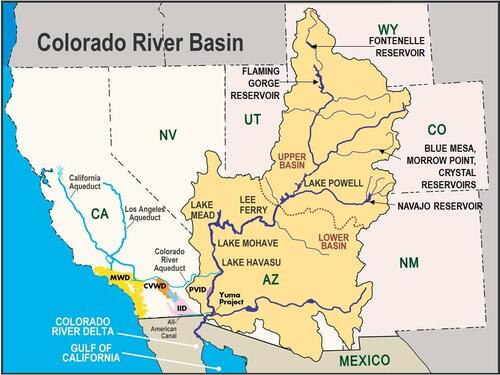