Trump Derangement Syndrome Is Going To Get Worse, by Mark Bauerlein

For sufferers of TDS, Trump and those who support him reject what they think good and holy—namely government and its aligned institutions and their privileged places in them. From Mark Bauerlein at The Epoch Times via zerohedge.com:

Never in my lifetime have so many people been so obsessed with one man.

People despised Nixon; they cheered or reviled Reagan, and they revered or dismissed Obama, but none of those responses comes close to the mania attached to Donald Trump. I mean the hate side, not the adoration. The former feeling and the cult it spawns dwarfs the latter. Liberals mock the idol worship they find among Trump’s supporters, but while Trumpists smile and cheer and vote for the man, liberals abhor him with a passion three times as fierce. It’s visceral, fanatical, knee-jerk. If nearly the entire psychology profession didn’t suffer from the condition to greater or lesser degrees, it would be a likely subject for diagnosis, particularly given the unself-conscious way in which the victims of Trump Derangement Syndrome act out their animus. 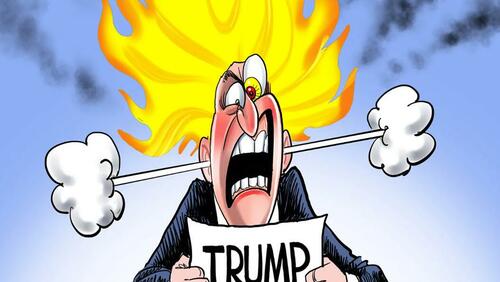 It doesn’t occur to the diseased ones to ask why they can’t get the Orange-Haired Man out of their heads. They hate him; they loathe him; they fear him . . . We get it nonstop; we hear them; they can’t stop saying so. But the expression doesn’t bring them any relief—not that we can see. Their exasperation only grows and sputters. Voicing what one feels deep inside is supposed to ease the feeling, to externalize it and let the anger, love, bitterness, joy, etc. flow, not be dammed up within. One of Freud’s patients called it “the Talking Cure,” when he asked her to speak, just speak of anything that pops into her mind, and she and other patients found that they did feel a little better once the session concluded.