Governments are bankrupt. Never underestimate their rapacity. From Doug Casey at internationalman.com: 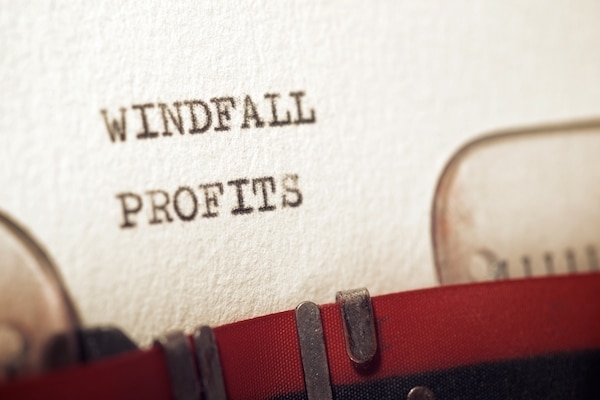 International Man: What is a windfall profits tax?

It seems like a vague and arbitrary concept politicians use to justify taking more wealth from people they don’t like.

It’s defined as the taking of “unusual and unearned” or “exploitative” profits.

The application of a windfall profits tax always has to do with the concept of “fair.” Whenever you see the word fair being used, be on alert. “Fair” is among the most dangerous words in the English language.

Everybody approves of the idea of fairness in theory, in the abstract. But in practice, it’s a chimera, a will o’ wisp. Individuals of good will try to treat others fairly, i.e., with honor and justice; it’s a question of doing what you say you’ll do and not aggressing against other persons or their property. But the concept of “fair” usually connotes a sense of forced division of spoils. At the level of government, where coercion is overtly or tacitly in the picture, fairness tends to be no more than a political buzzword. They manufacture artificial notions of “fair” profits, “fair” prices, a “fair” wage, “fair” housing, and the like. These are arbitrary and pernicious concepts that tend to rationalize envy. This is entirely apart from the fact that taxes—the forceful taking of another’s property under cover of the law—are themselves immoral. But that’s a subject for another day.

Government takes it upon itself to tax what they consider windfall, or unfair, profits. Occasionally they pass out huge amounts of money to cover windfall losses on the part of favored corporations. Both windfall profit taxes and subsidies are symptomatic of the accelerating takeover of the economy by the political class. In a free society, profits are rewarded, and losses are punished by the market—end of story. In addition to moral benefits, that incentivizes businesses to create wealth, which benefits everyone. That’s how countries grow rich and stay free.