The attack on Western Europe: you cannot win a war if you don’t understand that you are fighting one. By Ugo Bardi

The Europeans are beginning to understand that the U.S. proxy war in Ukraine is against Europe. From Ugo Bardi at senecaeffect.com: 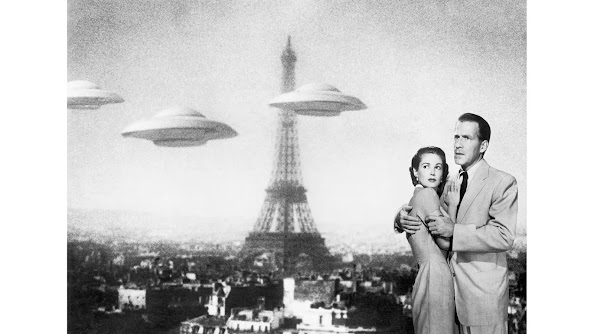 Image: Earth against UFOs (1956)
A typical science fiction trope is that when the aliens invade Earth, they do so in secret, capturing the minds of single earthlings rather than coming in with bombing raids. The task of the hero, then, is to convince the authorities that Earth is under attack before it is too late. Something similar may be happening with the war in Ukraine. Europeans, just like most Western citizens, still don’t seem to understand what’s going on, but the idea that it is a war directed against Western Europe is slowly gaining traction in the memesphere. It has not yet reached the mainstream discourse, and it probably never will. But some ideas don’t need to be shared by 51% of the people to start having an effect on politics. The message that Europe is being crushed by its supposed allies and its own government may eventually reach the “critical mass” needed to be heard and acted upon. I have already discussed this subject in some of my recent posts, “What is the next thing that will hit us” and others. Here is Noah Carl’s recent take on his blog, published with his kind permission. His conclusion is that:
“geopolitical developments since the start of Russia’s invasion certainly look convenient from the perspective of US hawks: Russia’s military has been severely weakened; Nord Stream 2 has been sanctioned and sabotaged; US LNG exports to Europe have surged; European companies have started relocating to America; and the NATO alliance is stronger than ever.
US hawks 1; everyone else 0.“


Image: US Navy, FA-18 launch during Inherent Resolve, 2014
When it comes to explaining how we ended up with Russia launching a full-scale invasion of Ukraine, and Europe proceeding to cut itself off from its main energy supplier, there are two main camps.

One camp says that Putin is an imperialist bent on recreating the Soviet Union, who invaded Ukraine (a country he doesn’t consider real) in order to expand Russia’s territory and population. According to this camp, there’s nothing the West could have done to prevent Putin’s invasion short of allowing Ukraine to become a hollowed-out vassal state, or arming Ukraine to the teeth in the faint hope of deterring Russian bellicosity.

The other camp says that Putin saw US/NATO involvement in Ukraine as a threat to Russian interests (including both the security of Russia itself and the interests of ethnic Russians in the Donbas), and he invaded the country as a way to neutralise that threat. According to this camp, the West could have prevented Putin’s invasion by enforcing an agreement along the lines of Minsk II, i.e., one that enshrined Ukrainian neutrality.

The key element here is US/NATO involvement, since without such involvement Kiev would never have risked provoking its larger and more powerful neighbour. Despite this, few in the second camp try to explain why the US/NATO got involved in Ukraine. Or if they do, they chalk up to “misguided policy” or “policy mistakes”; US officials were just too wedded to the principle that every state can choose its own alliances.