Is America Becoming Rome Versus Byzantium? By Victor Davis Hanson

If America splits up, it won’t be the first empire to do so. From Victor Davis Hanson at The Epoch Times via zerohedge.com:

In A.D. 286 the Roman emperor Diocletian split in half the huge Roman Empire administratively—and peacefully—under the control of two emperors.

By 330 the Emperor Constantine institutionalized that split by moving the empire’s capital from Rome to his new imperial city of Constantinople, founded on the site of the old Greek polis of Byzantium.

The two administrative halves of the once huge empire continued to drift apart. 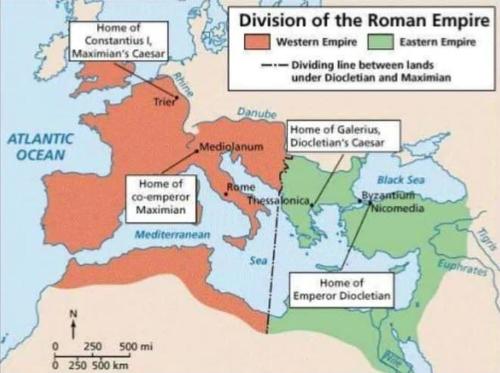 Soon there arose two increasingly different, though still kindred versions, of a once unified Romanity.

The Western empire eventually collapsed into chaos by the latter fifth century A.D.

Yet the Roman eastern half survived for nearly 1,000 years. It was soon known as the Byzantine Empire, until overwhelmed by the Ottoman Turks in 1453 A.D.

Historians still disagree over why the East endured while the West crumbled. And they cite the various roles of differing geography, border challenges, tribal enemies, and internal challenges.

We moderns certainly have developed unfair stereotypes of a supposedly decadent late imperial Rome of Hollywood sensationalism that deserved its end. And we likewise mistakenly typecast a rigid, ultra-orthodox bureaucratic “Byzantine” alternative that supposedly grew more reactionary to survive in a rough neighborhood.