” Mad as a hatter ” is a colloquial English phrase used in conversation to suggest that a person is suffering from insanity. It is believed to emanate from Denton, Greater Manchester, where men in the area worked predominantly in the hattery business, which used mercury in the hat making process.” 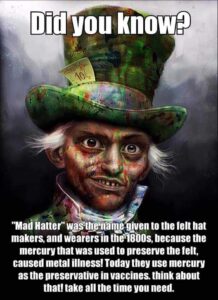 Important Quotes from Virology and Vaccinology Experts that Never are Interviewed on the Mainstream Media, by Gary G. Kohls, MD

There is definitely a party line in the medical profession, and in the media’s coverage and the government’s oversight. From Gary G. Kohls, MD at lewrockwell.com:

(The Bill & Melinda Gates Foundation and the US Public Health Services at the National Institutes of Health, CDC and NIAID Have Serious Undisclosed Conflicts of Interest)

“The initial COVID-19 panic (and the ultimate economic shut-down that will kill small businesses) was no mistake; it wasn’t an overly cautious WHO or Dr. Fauci that made the call in haste. The panic and over-reaction was planned and prepared for. Bill Gates (and his billionaire’s club [the World Economic Forum]) held an exercise called “Event 201” in preparation for a coronavirus pandemic in which he calculated 33 million deaths would occur world-wide. Anthony Fauci also predicted a pandemic would happen while Donald Trump was president. Fauci worked for Gates. Fauci (and his NIAID) also sponsored work on coronaviruses in the Wuhan laboratory with US taxpayer money. We see the actions of the WHO, Fauci, and Bill Gates – who somehow is the go-to authority on SARS COV 2 having never taken a medical course in his life. Laugh all you want but this is the New World Order attempting to take over. And they can do it. They own the media, even FOX. They even own two of the major news outlets, Reuters and the AP. They have created a false reality in which anyone that questions what they are doing is labeled a conspiracy theorist. There IS a conspiracy and you are witnessing it right now. This makes no sense at all unless you factor in an active conspiracy of disinformation and lies.” – An anonymous respondent, reacting to an important Tony Robbins video (that interviewed a handful of highly-qualified health experts who never get interviewed by Mainstream Media journalists, whose narrative, though false, misleading and corporate-controlled, appears to be sacrosanct. https://www.youtube.com/watch?v=YgP_Au5RZVw)

3 Major Reasons Why More Parents Are Become Skeptical About Vaccinating Their Children, by Arjun Walia

As this article makes clear, many of the concerns about vaccines center on what’s in them beside the vaccine itself. That often includes mercury and aluminum. Yet, for years, anyone who has questioned vaccine safety has been labeled “anti-vaccine.” From Arjun Walia at lewrockwell.com:

More and more parents around the globe are choosing to opt out of vaccinating themselves and their children. As a result of this trend that’s been gaining more and more momentum, a harsh response has come from the “pro-vaccine” community -criticizing parents for their decision to not vaccinate. At the end of the day it’s not really about “pro-vaccination” or “anti-vaccination,” it’s not one “against” the other or about pointing fingers and judgement, it’s simply about looking at all of the information from a neutral standpoint. It’s about asking questions and communicating so people can make the best possible decisions for themselves and their children. Parents love their kids and the vaccine “controversy” has made it difficult for many parents to know what to do.

The study concludes with the observation that “after repeated vaccine controversies in France, some vaccine hesitancy exists among French GPs, whose recommendation behaviours depend on their trust in authorities, their perception of the utility and risks of vaccines, and their comfort in explaining them.”

As a result, the study outlines how “up to 43 % of GPs sometimes. or never, recommend at least one specific vaccine to their patients.”

The percentages differ because the study was broken down as to which vaccines, and whether they are recommended never, sometimes, often or always. You can refer to the study for more details.

The authors’ overall findings “suggest that VH [vaccine hesitancy] is prevalent among French GPs. It may make them ill at ease in addressing their patients’ concerns about vaccination, which in turn might reinforce patients’ VH.”

Again, this isn’t a secret, another study (out of many, cited in the France publication) outlines how “more research is needed to understand why some health professionals, trained in medical sciences, still have doubts regarding the safety and effectiveness of vaccination.” (source)

To continue reading: 3 Major Reasons Why More Parents Are Become Skeptical About Vaccinating Their Children