A Skeptic’s Guide to the Russiagate Fixation, by Aaron Maté

As SLL has been saying for over two years, the Mueller report is going to be a nothing because there was never anything to report. From Aaron Maté at thenation.com:

Robert Mueller has yet to allege collusion, and Democrats who accuse Trump of being a Kremlin conspirator are silent when his policies escalate tensions with Russia. 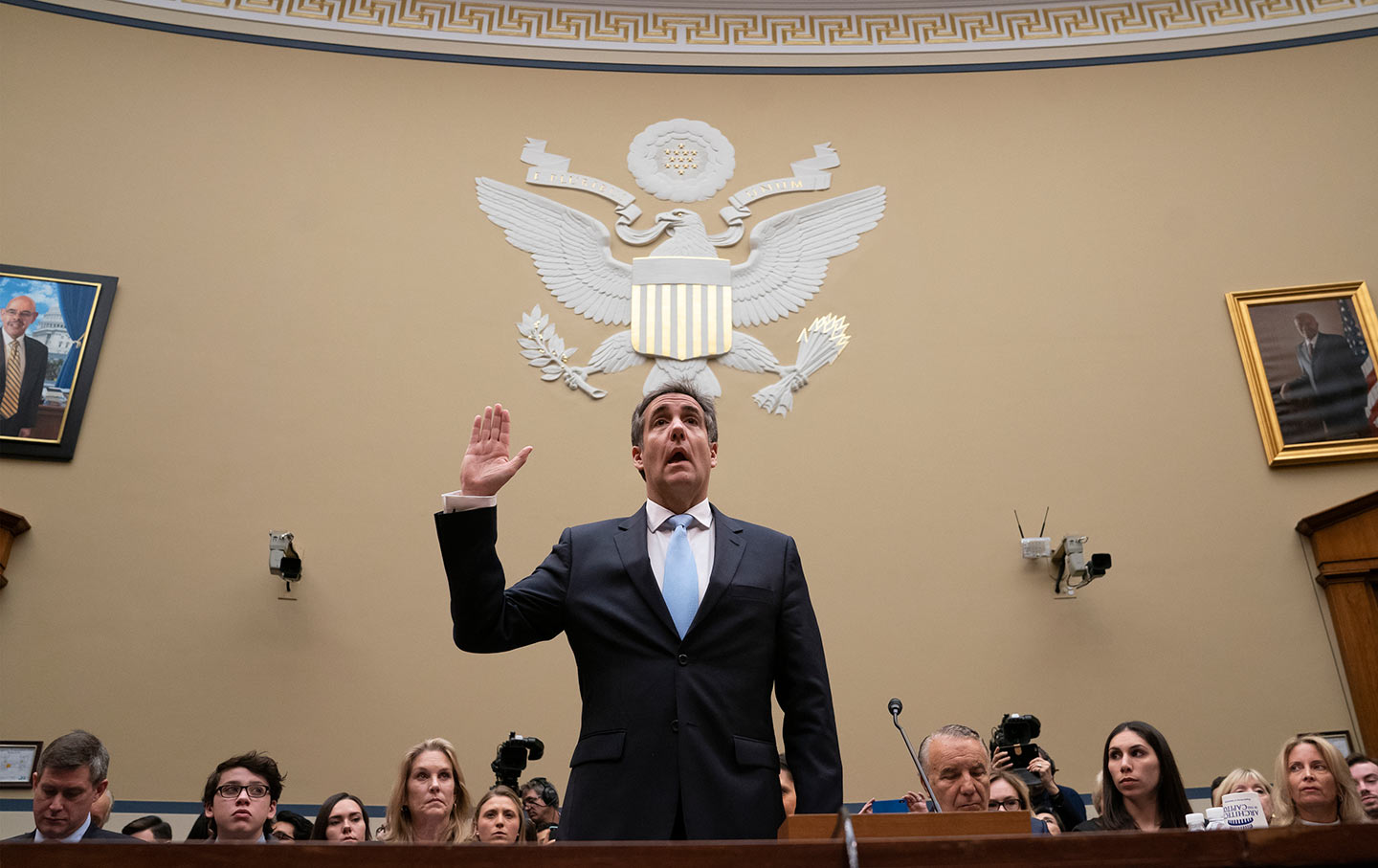 Michael Cohen is sworn in to testify before the House Oversight and Reform Committee. (AP Photo / J. Scott Applewhite)

As we await the rumored delivery of special counsel Robert Mueller’s final report, it is looking increasingly unlikely that the document will allege a Trump-Russia conspiracy. To date, Mueller’s numerous indictments and voluminous court filings have not accused a single American of collusion with Russia. And, tellingly, prominent media and political voices, who have spent two years raising expectations that Mueller will find collusion, are now quietly moving the goalposts.

A significant hurdle in the hunt for collusion is that every close associate to “flip” on President Donald Trump has stated that they did not witness it. In his recent congressional testimony, former Trump fixer Michael Cohen said that he has seen no evidence of Trump-Russia collusion, and knocked down several pillars of the conjecture surrounding it. In re-avowing that he has never been to Prague, Cohen rebuked a central claim of the Steele dossier that he traveled there to pay off Russian hackers. Cohen’s denial deals a serious blow to the credibility of the dossier’s author, Christopher Steele. It also underscores the credulousness of FBI officials, members of Congress, and the many news outlets that relied on and amplified Steele’s material. Cohen also poured cold water on suspicions fueled by Steele that Russians have compromising material on Trump.

There are differing perspectives on how Cohen addressed another “bombshell” at which he was at the center. In January, Buzzfeed Newsreported that Mueller has evidence that President Trump directed Cohen to lie to Congress about the failed Trump Tower real-estate project in Moscow. The story triggered wall-to-wall news coverage until Mueller’s office issued an unprecedented statement that called Buzzfeed’s reporting “not accurate.” Cohen echoed Mueller’s denial by asserting that “Trump did not directly tell me to lie to Congress.” When pressed on why he never corrected the Buzzfeed story and the multiple outlets that echoed it, Cohen responded, “We are not the fact-checkers for BuzzFeed.”

Buzzfeed nonetheless claimed vindication because Cohen also told Congress that he had lied after inferring from Trump’s public and private statements that the president wanted him to. Buzzfeed’s editor in chief, Ben Smith, argued that Cohen had confirmed the story because one of its “core central pieces” was that “Cohen thought he had been told to lie.” But that is not what Buzzfeed had originally reported: The story claimed—and prompted impeachment talk as a result—that Trump had suborned perjury by “explicitly telling [Cohen] to lie” and because he “personally instructed [Cohen] to lie.” Assigning those actions directly to Trump hardly conforms to Cohen’s explanation that he had merely intuited or interpreted Trump’s intentions.

However one construes Cohen’s comments, his testimony also undercut the innuendo and conjecturetriggered by reports that the Trump Organization planned to offer Vladimir Putin a $50 million penthouse apartment. Cohen dismissed it as “a marketing stunt” proposed by his colleague Felix Sater, and deflated speculation that Trump was involved.

As Cohen fails to offer a collusion smoking gun, proponents of the collusion theory continue to hope one emerges in the case of former campaign chair Paul Manafort. In January, it emerged that Mueller has accused Manafort of lying to his team about sharing Trump polling data with his Ukrainian-Russian fixer, Konstantin Kilimnik, at some point during the 2016 campaign. According to Mueller, the FBI assesses that Kilimnik has an unspecified “relationship with Russian intelligence.” The alleged lie, a Mueller prosecutor told the court, goes to “the heart” of the special counsel’s mandate.

No indictments have resulted from this issue, and it makes no appearance in Mueller’s two sentencing memos in Manafort’s case. There is also the fact that, although sharing polling data with a Russian associate could theoretically go to “the heart” of the Mueller probe, Manafort’s actual case has nothing to do with it. As Virginia Judge T.S. Ellis noted at Manafort’s first sentencing last week, Manafort “is not before this court for anything having to do with collusion with the Russian government.” Manafort was instead accused and convicted of financial crimes stemming from his lobbying work in Ukraine. In sharing the polling data, The New York Timesnoted, Manafort “might have hoped that any proof he was managing a winning candidate would help him collect money he claimed to be owed for his work on behalf of the Ukrainian parties.”

If the the polling data is evidence of Trump-Russian collusion, or even if Kilimnik is an actual Russian intelligence official, then Mueller has yet to allege it. Manafort’s attorneys previously asked Mueller for any discovery showing contacts between Manafort and “Russian intelligence officials,” but were told that “there are no materials responsive to [those] requests.” The DC judge overseeing the case, Amy Berman Jackson, says, “Whether Kilimnik is tied to Russian intelligence or he’s not… I have not been provided with the evidence that I would need to decide.” Jackson has only ruled that Manafort’s alleged lie is material to the scope of Mueller’s inquiry. The language in Mueller’s appointment order, she ruled, “is sufficiently broad to get over the relatively low hurdle of materiality in this instance.”

That makes any relevance of the polling-data issue to collusion entirely speculative, but that is not how it has been treated. Virginia Democratic Senator Mark Warner, the vice chair of the Senate Intelligence Committee, dubbed Manafort’s sharing of polling data “the closest we’ve seen yet to real, live, actual collusion.” If Warner is correct, then his assessment only makes clear just how far the Russia probe remains from actual collusion.

Warner’s House Intelligence counterpart, Representative Adam Schiff (D-CA), does not fare better. Asked by CBS News if he has “direct evidence” of Trump-Russia collusion, Schiff cited the infamous e-mail sent by music publicist Rob Goldstone offering Donald Trump Jr. compromising information about Hillary Clinton on the Russian government’s behalf. But by Goldstone’s own account, his overture to Trump Jr. was “publicist puff,” and his claims of Russian government support for Trump were invented out of thin air: “I had no idea what I was talking about,” he told NPR last year. To date, Mueller has given us no reason to challenge that assessment. Goldstone and every other participant in the Trump Tower meeting has been questioned by Congress or Mueller; none have faced any charges related to it. In short, if Goldstone’s letter is “direct evidence” of a crime, Mueller has yet to allege it.

If this is the most damning evidence that the Democrats’ top Russia investigators can adduce, it is no wonder that the bipartisan Senate Intelligence probe has “uncovered no direct evidence of a conspiracy between the Trump campaign and Russia,” as NBC News reported last month. And amid rumblings that Mueller is wrapping up his investigation, it is also no wonder that Schiff and others who have ceaselessly promoted the Trump-Russia collusion theory are preparing their audiences for a letdown.

While insisting that there is “pretty compelling evidence” of collusion, Schiff now hedges by cautioning that Democrats should not attempt to impeach Trump “in the absence of very graphic evidence.” Asked by ABC News if he would accept it if Mueller “says definitively we find no collusion,” Representative Jerry Nadler (D-NY) said that we can “agree or disagree. But this investigation goes far beyond collusion.” After two years of our hearing about the “beginning of the end” for Trump, several outlets now proclaim that it’s in fact “the end of the beginning.” CNN legal analyst Renato Marrioti instructs his followers that “Mueller’s report will almost certainly disappoint you, and it’s not his fault. It’s your fault for buying into Trump’s false narrative that it is Mueller’s job to prove ‘collusion.’” It certainly cannot be the fault of pundits like himself who have argued that “collusion” has already been established, or even charged.

Both Schiff and Nadler have now launched what two major outlets have described as “turbocharged” and “supercharged” congressional probes of Trump’s ties to Russia and alleged corruption. Perhaps they will uncover evidence that federal investigators have missed. Given that both probes are covering ground that the exhaustive and more powerful Mueller inquiry has already traversed, it would be wise not to get our hopes up.

Caution seems all the more prudent as Trump-Russia innuendo continues to overshadow the very real dangers in US-Russia relations. There has been a noted absence of media and political pushback (with some exceptions) to Trump’s withdrawing the United States from the INF Treaty with Russia, despite the increasing threat of a renewed arms race between the two Cold War powers. The Trump administration is escalating its opposition to the Nord Stream 2, a massive German-Russia pipeline project, by reportedly preparing to impose sanctions on it. More than two-dozen Senate Democrats have endorsed a bill that joins Trump in calling for the project’s cancellation. Trump’s ongoing coup attempt against Russia’s ally Venezuela has not only received a tepid Democratic response (also with some exceptions), but even support from party stalwarts including Representatives Schiff (CA), Nancy Pelosi (CA), Eliot Engel (NY), former vice president Joe Biden, former president Bill Clinton, and Senators Chuck Schumer (NY) and Dick Durbin (IL).

Democratic support for the hawkish foreign policy of a Republican White House is nothing new. The current dynamic, however, is unprecedented. Democrats and their media partisans frequently accuse the president of being soft on Russia or even a Kremlin conspirator, while simultaneously falling silent—or even offering an endorsement—when his reckless policies build tensions. That Trump’s dangerous moves against Russia are being overlooked amid the drive to prove that he and Putin are secretly in cahoots is one more reason to treat the Russiagate fixation with skepticism. Based on what it has yielded to date, the Mueller probe’s outcome may soon be another.