French Incomes Place Below Some of America’s Poorest States — And the Protesters Know It, by Ryan McMaken

To the French protestors, what’s probably more infuriating than their low incomes is that those incomes are stagnanting while costs of living continue to rise. From Ryan McMaken at mises.org:

With the rise of the Yellow Vest Movement in France — which began last October and continues today — French activists and writers have begun to re-evaluate the state of French income and poverty. Since the movement began, articles with titles such as ” Revealed: The shocking scale of poverty in France in 2018 ” or ” Soul-searching in France as poverty leaves one million children hungry ” have become more overtly political given the context of the protests.

Typically, the government’s response to accusations of widespread poverty — which, as in America, are not necessarily accurate accusations — has been to spend more money on social programs.

But here’s the thing: France is already spending more than the rest of Europe when it comes to welfare programs. According to the OECD, when it comes to “public social spending” as a percentage of GDP, France tops the list at over 31 percent.

In contrast, Swedish social spending is 26 percent of GDP, while Germany and Norway come in at 25 percent. Switzerland is near the bottom of the list at 16 percent, while the US is at 18 percent.

These numbers tend to move around some from year to year, but we can see that France was still spending more than anyone else in 2016: 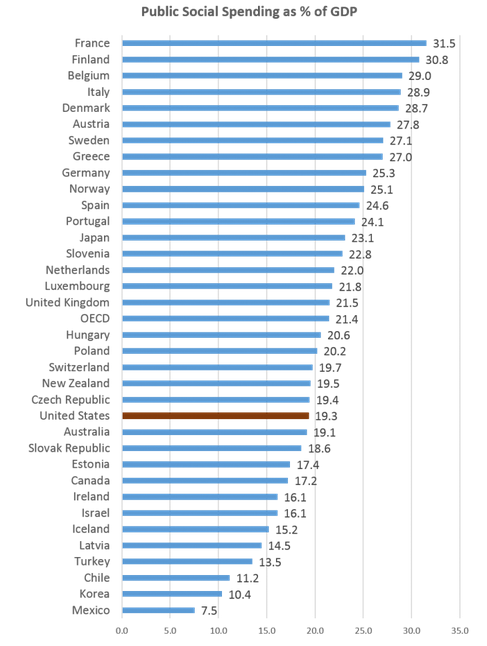 But poverty isn’t the only place where French pundits and protestors may see themselves as “falling behind.” When it comes to the median household, France isn’t competing well with its neighbors, either.

According to the OECD’s measure of median disposable income — which takes into account taxes as well as income received from social programs — France ranks below its German, Belgian, and Swiss neighbors. Canada, the US, and Australia all rank well ahead of France as well. 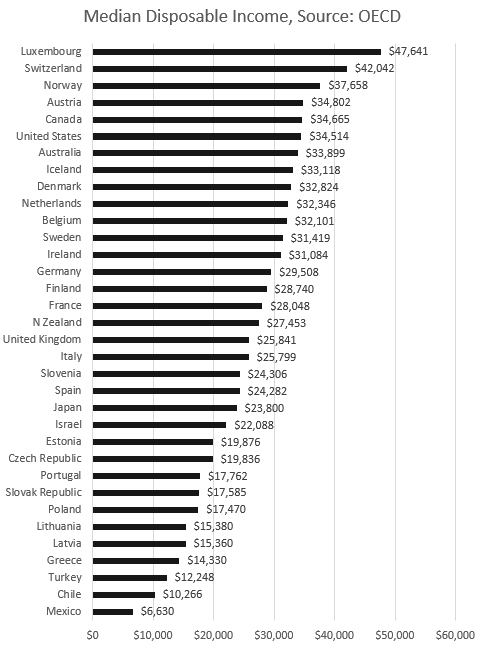 Moreover, the median French citizen appears to live on very little if compared to most Americans. if we compare France to individual US states — using the method explained here — we find that France’s disposable income may rank below every US state except Louisiana.1

Basically, I’m just using the OECD’s disposable income numbers, and then applied the US-wide income number to each states based on how far above or below the national median income level each state is. It’s a pretty crude measure, but the results are believable. It’s not exactly pushing the bounds of plausibility to suggest that infrastructure quality, incomes, and the general quality of life in high-income states like Minnesota, Utah, Colorado, and Washington are very high indeed — just as the income data suggests: 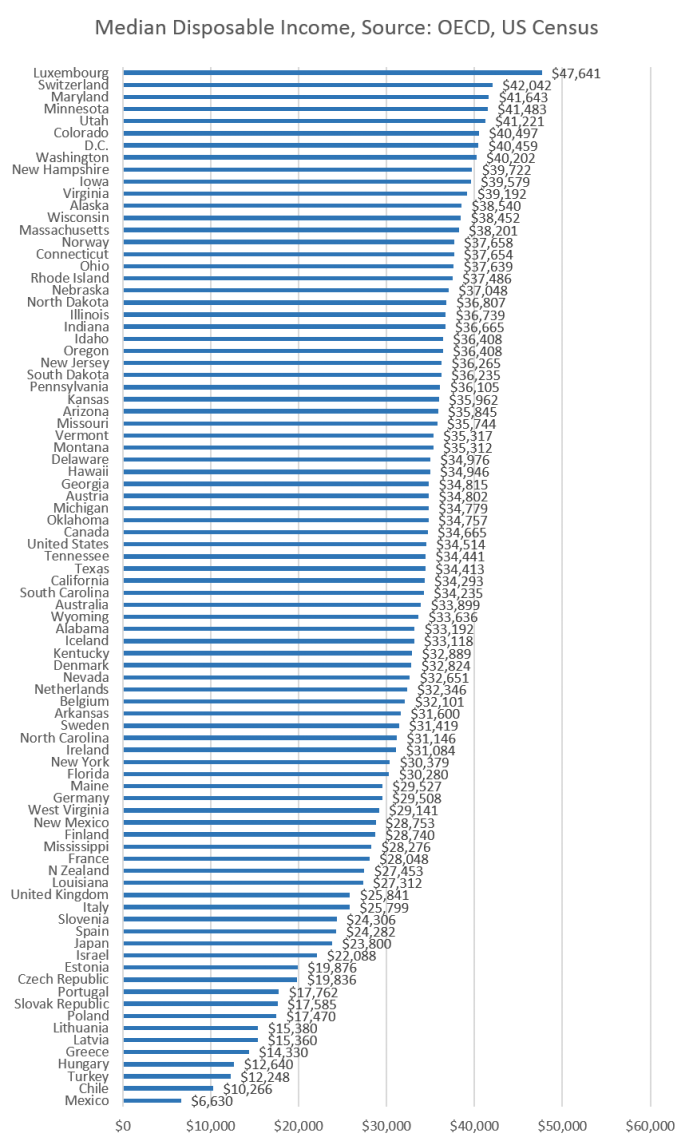 When faced with income numbers like these, of course, skeptics may object that “income isn’t everything!” and that “generous welfare programs make life longer and better.” Well, if that’s the case, then France seems especially inefficient at turning its social spending into health and welfare.

Advocates of the “quality of life” position, for example, tend to point to official life expectancy numbers as a preferred measure. But in this respect, France is equal to Canada and Australia, although the Canadians and the Aussies spend half as much as France does on social benefits programs. Similarly, Switzerland achieves better health outcomes with far less social spending than the French state.

High Social Spending Can Be an Indicators of a Stagnant Economy

The truth, however, is that social spending is not the key to reducing poverty, raising median incomes, or generally improving the lives of residents. In fact, rising social spending may be more the result of stagnation in an economy since social programs are likely to become more widespread as more residents experience poverty, unemployment, or unmanageably high living costs.

We certainly see this in comparisons between US states. When we compare social spending on a state-by-state basis, we find that it is often the states with the least productive workers and highest poverty rates that have the most social spending.

In other words, social spending doesn’t solve any of these problems, but it does become more prevalent where economies are less productive.

This, however, is not what we see in France. Instead, social-spending rates are high, and when the government is pressured to “do something” about poverty, the state merely responds by promoting more social spending.

The real solution lies in doing those things which the French state vehemently refuses to do: deregulating industries, embracing global free trade, breaking the power of the unions, and ending subsidies, price controls, and other measures designed to benefit powerful interest groups at the expense of everyone else.

The French economy — which is notorious for its inflexibility and lack of competition in agriculture and other select industries — increasingly looks like one of the least free in Europe.  It simply isn’t delivering the sort of economic growth that is necessary to keep social spending under control at a manageable level of spending. As the ongoing protests by the Yellow Vests suggests, many French residents are well aware of this.

One response to “French Incomes Place Below Some of America’s Poorest States — And the Protesters Know It, by Ryan McMaken”