What’s Behind Our World on Fire? by Patrick J. Buchanan

The title is wrong. The world isn’t on fire yet, what Buchanan is describing is a brush fire. The real conflagration is yet to come. From Buchanan at buchanan.org:

When the wildfires of California broke out across the Golden State, many were the causes given.

So, too, there appears to be a multiplicity of causes igniting and fueling the protests and riots sweeping capital cities across our world.

The year-long yellow vest protests in Paris, set off by fuel price hikes that were swiftly rescinded, seemed to grind down this weekend to several thousand anarchic and violent die-hards.

END_OF_DOCUMENT_TOKEN_TO_BE_REPLACED

Gilets jaunes: the French insurrection one year on, by Fraser Myers

One year on the French yellow vests are still protesting. They have a lot to protest. From Fraser Myers at spiked-online.com:

One year ago, 288,000 protesters took to the streets in over 2,000 locations across France. Dressed in their unmistakable hi-vis jackets, the gilets jaunes (yellow vests) blockaded highways and petrol stations, occupied roundabouts and toll booths, and marched through town centres. The protests were initially sparked by a hike in fuel tax but they quickly came to embody a wider resentment towards the status quo. This weekend will be the yellow vests’ acte 53 – the 53rd consecutive week of protest to mark the anniversary of the movement.

Just a year-and-a-half after the election of President Macron, which was hailed by liberals across the West as a turning point against the populist wave of 2016, the yellow-vest movement staged what would become the most significant revolt in France since les événements of May 1968. The French working classes, who had for so long been marginalised economically, politically and culturally, were finally making their voices heard.

END_OF_DOCUMENT_TOKEN_TO_BE_REPLACED

Even if France’s current leader wasn’t an elitist idiot, the country would probably be irretrievable. From Guy Millière at gatestoneinstitute.org: 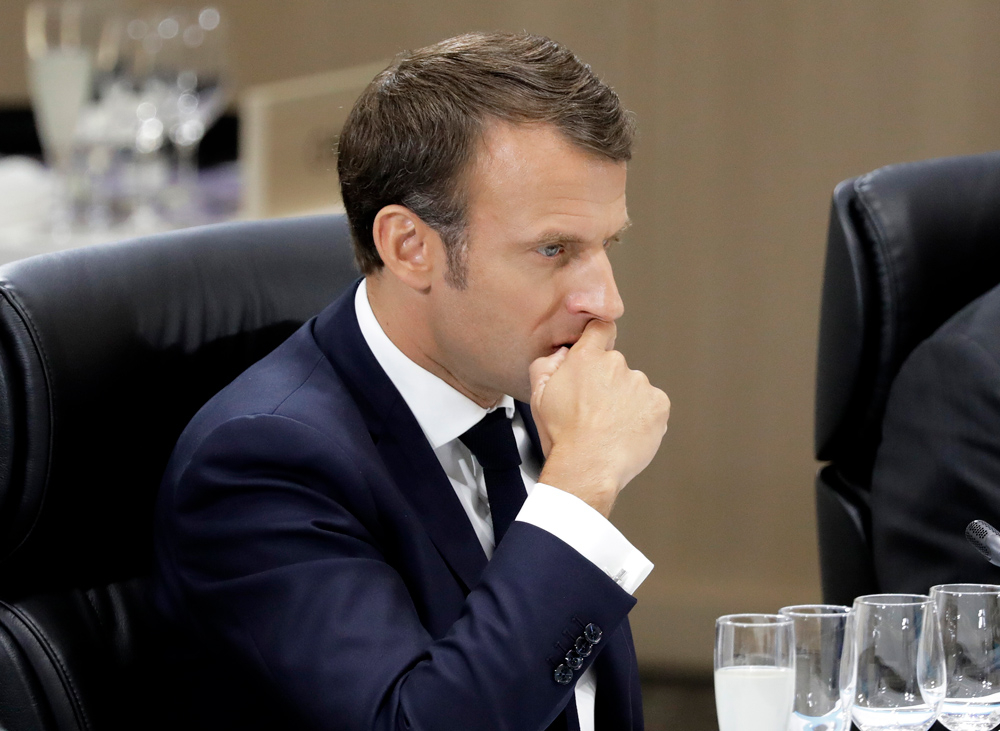 French President Emmanuel Macron never says he is sorry for those who have lost an eye or a hand from extreme police brutality. Instead, he asked the French parliament to pass a law that almost completely abolishes the right to protest and the presumption of innocence, and that allows the arrest of anyone, anywhere, even without cause. The law was passed. (Photo by Kiyoshi Ota – Pool/Getty Images)

Paris, Champs-Élysées. July 14. Bastille Day. Just before the military parade begins, President Emmanuel Macron comes down the avenue in an official car to greet the crowd. Thousands of people gathered along the avenue shout “Macron resign”, boo and hurl insults.

END_OF_DOCUMENT_TOKEN_TO_BE_REPLACED

French Incomes Place Below Some of America’s Poorest States — And the Protesters Know It, by Ryan McMaken

To the French protestors, what’s probably more infuriating than their low incomes is that those incomes are stagnanting while costs of living continue to rise. From Ryan McMaken at mises.org:

With the rise of the Yellow Vest Movement in France — which began last October and continues today — French activists and writers have begun to re-evaluate the state of French income and poverty. Since the movement began, articles with titles such as ” Revealed: The shocking scale of poverty in France in 2018 ” or ” Soul-searching in France as poverty leaves one million children hungry ” have become more overtly political given the context of the protests.

Typically, the government’s response to accusations of widespread poverty — which, as in America, are not necessarily accurate accusations — has been to spend more money on social programs.

But here’s the thing: France is already spending more than the rest of Europe when it comes to welfare programs. According to the OECD, when it comes to “public social spending” as a percentage of GDP, France tops the list at over 31 percent.

In contrast, Swedish social spending is 26 percent of GDP, while Germany and Norway come in at 25 percent. Switzerland is near the bottom of the list at 16 percent, while the US is at 18 percent.

END_OF_DOCUMENT_TOKEN_TO_BE_REPLACED

A Project to Transform France, by Guy Millière

Emmanuel Macron warns against anti-Semitism among the Yellow Vests, but ignores the obvious anti-Semitism of much of France’s Muslim population. From Guy Millière at gatestoneinstitute.org:

After sixteen Saturday demonstrations by the “yellow vests,” who began in November by protesting French President Emmanuel Macron’s increase in fuel prices, the controversy seems to have taken a darker turn.

END_OF_DOCUMENT_TOKEN_TO_BE_REPLACED

Flash-Balls, Pitchforks And A Backstop, by Raúl Ilargi Meijer

The flash-balls are here, the pitchforks are coming. From Raúl Ilargi Meijer at theautomaticearth.com:

It’s educational and even somewhat entertaining to observe the role of the western press in the ongoing erosion and demise of democracy in Europe. But while it’s entertaining, it also means their readers and viewers don’t get informed on what is actually happening. The media paints a picture that pleases the political world. And it it doesn’t please politicians to lift a veil here and there, too bad for the public.

The Shakespearian comedy that was performed last night in the UK House of Commons is a lovely case in point. Basically, MPs voted whether or not to allow PM Theresa May to change the Brexit deal she had told them about a hundred times couldn’t possibly be changed. Brexit has turned full-blown Groucho by now: “Those are my principles, and if you don’t like them… well, I have others.”

It was exactly two weeks ago last night that lawmakers voted by a historic 432 to 202 count to reject May’s Brexit deal. And now they voted to a) let her change it and b) go talk to the EU about changing it though Brussels has said as often as May herself that it cannot be changed. Remember: the UK is set to leave the EU 59 days from now, and counting.

It’s like in a game of chess that has long turned into a stalemate or threefold repetitionsituation: you stop playing. No such luck in British politics. The only way the parliament could find ‘unity’ (in a narrow vote) was to agree to ditch the Irish backstop that is an integral part of why the EU accepted May’s deal to begin with.

END_OF_DOCUMENT_TOKEN_TO_BE_REPLACED

The Yellow Vest Movement Has Gone Global, by Tyler Durden

Yellow vests are popping up everywhere. From Tyler Durden at zerohedge.com:

The Yellow Vest anti-government movement started in France on November 17, when over 300,000 people across France protested a carbon tax on fuel that French President Emmanuel Macron touted as evidence of France’s leadership when it comes to mitigating climate change.

The Yellow Vest protests quickly evolved into a general anti-government movement – with hundreds of thousands of angry French citizens taking to the streets for ten straight weeks of mostly peaceful protests marked with pockets of violence, looting and mayhem.

What’s more – the movement has gone worldwide – with perhaps the most notable protests outside France taking place in Belgium, where Brussels riot cops have dealt with week after week of protesters blocking oil depot and throwing hard objects at them.

‘The gilets jaunes are unstoppable’, by Christopher Guilluy

An entire class of French people are tired of being treated as second-class citizens. From Christopher Guilluy at spiked-online.com:

The gilets jaunes (yellow vest) movement has rattled the French establishment. For several months, crowds ranging from tens of thousands to hundreds of thousands have been taking to the streets every weekend across the whole of France. They have had enormous success, extracting major concessions from the government. They continue to march.

Back in 2014, geographer Christopher Guilluy’s study of la France périphérique (peripheral France) caused a media sensation. It drew attention to the economic, cultural and political exclusion of the working classes, most of whom now live outside the major cities. It highlighted the conditions that would later give rise to the yellow-vest phenomenon. Guilluy has developed on these themes in his recent books, No Society and The Twilight of the Elite: Prosperity, the Periphery and the Future of France. spiked caught up with Guilluy to get his view on the causes and consequences of the yellow-vest movement.

spiked: What exactly do you mean by ‘peripheral France’?

Christophe Guilluy: ‘Peripheral France’ is about the geographic distribution of the working classes across France. Fifteen years ago, I noticed that the majority of working-class people actually live very far away from the major globalised cities – far from Paris, Lyon and Toulouse, and also very far from London and New York.

Technically, our globalised economic model performs well. It produces a lot of wealth. But it doesn’t need the majority of the population to function. It has no real need for the manual workers, labourers and even small-business owners outside of the big cities. Paris creates enough wealth for the whole of France, and London does the same in Britain. But you cannot build a society around this. The gilets jaunes is a revolt of the working classes who live in these places.

They tend to be people in work, but who don’t earn very much, between 1000€ and 2000€ per month. Some of them are very poor if they are unemployed. Others were once middle-class. What they all have in common is that they live in areas where there is hardly any work left. They know that even if they have a job today, they could lose it tomorrow and they won’t find anything else.

END_OF_DOCUMENT_TOKEN_TO_BE_REPLACED

The Yellow Vests Get it Right, by Robert Gore

The mainstream media has degenerated irreparably. Here’s a reliable rule of thumb: if it’s important it’s not covered; if it’s covered it’s not important. Stories in the American mainstream press about Yellow Vest protests have been few. One aspect of the protests, transcendently important, has received scant coverage.

The Yellow Vest protestors have called for a coordinated run on French banks. Whether they realize it or not, they’re playing with nuclear warheads that could annihilate not just the French, but Europe’s and the entire world’s financial system. Because inextricably linked to the ends of contemporary governments―how much they can screw up the lives of those who must live under them—is the question of means―how do they fund their misrule? The short answer is taxes and debt.

Since 1971, when President Nixon  “temporarily” suspended international convertibility of dollars for gold (it’s never been reinstated), the monetary basis of the global economy has been fiat debt. Neither government or central bank debt nor currencies are tethered to any real constraint, like precious metals (see “Real Money,” SLL). Thus, politicians and monetary officials can create as much debt as they want: debt by fiat.

END_OF_DOCUMENT_TOKEN_TO_BE_REPLACED

One impetus behind the Yellow Vest movement is to restore real democracy to a country that has become a democracy in name only. From Diana Johnstone at unz.com:

French Democracy Dead or Alive? Or perhaps one should say, buried or revived? Because for the mass of ordinary people, far from the political, financial, media centers of power in Paris, democracy is already moribund, and their movement is an effort to save it. Ever since Margaret Thatcher decreed that “there is no alternative”, Western economic policy is made by technocrats for the benefit of financial markets, claiming that such benefits will trickle down to the populace. The trickle has largely dried up, and people are tired of having their needs and wishes totally ignored by an elite who “know best”.

President Emmanuel Macron’s New Year’s Eve address to the nation made it perfectly clear that after one unconvincing stab at throwing a few crumbs to the Gilets Jaunes (Yellow Vests) protest movement, he has determined to get tough

France is entering a period of turmoil. The situation is very complex, but here are a few points to help grasp what this is all about.

The Yellow Vests gather in conspicuous places where they can be seen: the Champs-Elysées in Paris, main squares in other cities towns, and the numerous traffic circles on the edge of small towns. Unlike traditional demonstrations, the Paris marches were very loose and spontaneous, people just walking around and talking to each other, with no leaders and no speeches.