The Chinese economic miracle rests on a mountain of debt. From Jim Rickards at dailyreckoning.com:

China’s shock currency devaluation last week begs the following questions: Is China a rising giant of the twenty-first century poised to overtake the United States in wealth and military prowess? Or is it a house of cards preparing to implode? 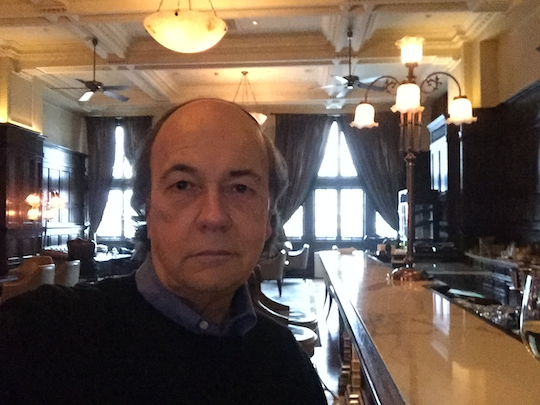 Your correspondent in the world famous Long Bar on the Bund in Shanghai, China. The Long Bar (about 50-yards long) was originally built in 1911 during the heyday of foreign imperialism in China just before the formation of the Republic of China (1912-1949). Bar regulars were divided into “tai-pans” (bosses who sat near the window), “Shanghailanders” (who sat in the middle), and “griffins” (newcomers who sat at the far end).

I made my first visits to Hong Kong and Taiwan in 1981 and my first visit to Communist China in 1991. I have made many visits to the mainland over the past twenty years and have been careful to move beyond Beijing (the political capital) and Shanghai (the financial capital) on these trips. My visits have included Chongqing, Wuhan, Xian, Nanjing, new construction sites to visit “ghost cities,” and trips to the agrarian countryside.

I spent five days cruising on the Yangtze River before the Three Gorges Dam was finished so I could appreciate the majesty and history of the gorges before the water level was lifted by the dam. I have visited numerous museums and tombs both excavated and unexcavated.

My trips included meetings with government and Communist Party officials and numerous conversations with everyday Chinese people, some of who just wanted to practice their English language skills on a foreign visitor.

In short, my experience with China goes well beyond media outlets and talking heads. In my extensive trips around the world, I have consistently found that first-hand visits and conversations provide insights that no amount of expert analysis can supply.

These trips have been supplemented by reading an extensive number of books on the history, culture and politics of China from 3,000 BC to the present. This background gives me a much broader perspective on current developments in China and a more acute analytical frame for interpretation.

China also has the fifth largest nuclear arsenal in the world with 280 nuclear warheads, about the same as the UK and France, but well behind Russia (6,490) and the U.S. (6,450). China is the largest gold producer in the world at about 500 metric tonnes per year.

China has the second largest economy in the world at $15.5 trillion in GDP, behind the U.S. with $21.4 trillion, and well ahead of number three Japan with $5.4 trillion. China’s foreign exchange reserves (including gold) are the largest in the world at $3.2 trillion (Hong Kong separately has $425 billion in additional reserves).

By way of contrast, the number two reserve holder, Japan, has only $1.3 trillion in reserves. By these diverse measures of population, territory, military strength and economic output, China is clearly a global super-power and the dominant presence in East Asia.

China’s military is growing stronger and more sophisticated, but it still bears no comparison to the U.S. military when it comes to aircraft carriers, nuclear warheads, submarines, fighter aircraft and strategic bombers.

Most importantly, at $11,000 per capita GDP, China is stuck squarely in the “middle income trap” as defined by development economists. The path from low income (about $5,000 per capita) to middle-income (about $10,000 per capita) is fairly straightforward and mostly involves reduced corruption, direct foreign investment and migration from the countryside to cities to purse assembly-style jobs.

The path from middle-income to high-income (about $20,000 per capita) is much more difficult and involves creation and deployment of high-technology and manufacture of high-value-added goods.

Among developing economies (excluding oil producers), only Taiwan, Hong Kong, Singapore and South Korea have successfully made this transition since World War II. All other developing economies in Latin America, Africa, South Asia and the Middle East including giants such as Brazil and Turkey remain stuck in the middle-income ranks.

China remains reliant on assembly-style jobs and has shown no promise of breaking into the high-income ranks.

In short, and despite enormous annual growth in the past twenty years, China remains fundamentally a poor country with limited ability to improve the well-being of its citizens much beyond what has already been achieved.

With this background and a flood of daily reporting on new developments, what do we see for China in the months and years ahead?

Right now, China is confronting social, economic and geopolitical pressures that are testing the legitimacy of the Communist Party leadership and may lead to an economic crisis of the first order in the not distant future.

In contrast to the positives on China listed above, consider the following negative factors:

Trade wars with the U.S. are escalating, not diminishing as I warned from the start in early 2018.

China retaliated with a shock devaluation of the yuan below 7.00 to one dollar, a level that had previously been defended by the People’s Bank of China. Resorting to a currency war weapon to fight a trade war shows just how badly China is losing the trade war.

But, this currency war counterattack will not be successful because it will incite more capital outflows from China. The Chinese lost $1 trillion of hard currency reserves during the last round of capital flight (2014-2016) and will lose more now, despite tighter capital controls. The spike of bitcoin to $11,000 following the China devaluation is a symptom of Chinese people using bitcoin to avoid capital controls and get their money out of China.

The unrest in Hong Kong is another symptom of the weakening grip of the Chinese Communist Party on civil society. The unrest has spread from street demonstrations to a general strike and shutdown of the transportation system, including the cancellations of hundreds of flights.

This social unrest will grow until China is forced to invade Hong Kong with 30,000 Peoples’ Liberation Army troops now massed on the border. This will be the last nail in the coffin of the academic view of China as a good global citizen. That view was always false, but now even the academics are starting to understand what’s really going on.

International business is moving quickly to move supply chains from China to Vietnam and elsewhere in South Asia. Once those supply chains move, they will not come back to China for at least ten years if ever. These are permanent losses for the Chinese economy.

Of course, lurking behind all of this is the coming debt crisis in China. About 25% of China’s reported growth the past ten years has come from wasted infrastructure investment (think “ghost cities”) funded with unpayable debt. China’s economy is a Ponzi scheme like the Madoff Plan and that debt pyramid is set to collapse.

This cascade of negative news is taking its toll on Chinese stocks. This weakness began in late June 2019 when the summit meeting between U.S. President Trump and President Xi of China at the G20 Leaders meeting in Osaka, Japan failed to produce substantive progress on trade disputes.

Since then, the trade wars have gone from bad to worse and China’s economy has suffered accordingly. My expectation is that a trade war resolution in nowhere in sight and the trade war issues have been subsumed into a larger list of issues involving military and national security policy.

This entry was posted in Collapse, Debt, Economics, Economy, Government and tagged China. Bookmark the permalink.