Roger Stone’s conviction is the last hope to save RussiaGate, by Patrick Henningsen

Roger Stone’s conviction may well be reversed because of his jury’s tainted forewoman. However, regardless of either facts or eventual outcome, Stone’s trial serves the purposes of those desperately trying to hold on to the shreds of Russiagate. From Patrick Henningsen at rt.com: 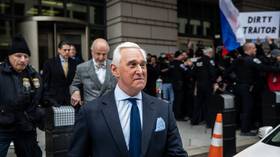 Stone, long-time political operative and former Trump adviser, is due to be sentenced today in federal court in Washington DC, for charges including lying to Congress, witness tampering and obstruction.

To the untrained eye it might seem like just another Beltway scandal, featuring one of Washington’s finest, a self-proclaimed Dirty Trickster and rancorous political operative.

Beyond the Machiavellian intrigue though, this trial and its outcome could carry some very profound implications. If convicted, his verdict will be hoisted by the American establishment to further validate the RussiaGate narrative, in particular the idea that Russia had passed hacked emails on to WikiLeaks at the height of the 2016 US presidential election.

It’s important to note that Stone’s case shares the very same fundamental prosecutorial assumptions which underpin Julian Assange’s US case, namely, that Assange and WikiLeaks are hostile foreign actors, and not members of the Fourth Estate. In this political hall of mirrors, each piece of the official myth reinforces the other, but it is this perversion of legalese which has allowed both of these anathemas of due process to persist, and that’s why these show trials should be regarded as a low point in the history of American justice.