Is Micheal Bloomberg just in the Democratic race to waste a lot of money and make everyone else look good? From Kit Knightly at off-guardian.org: 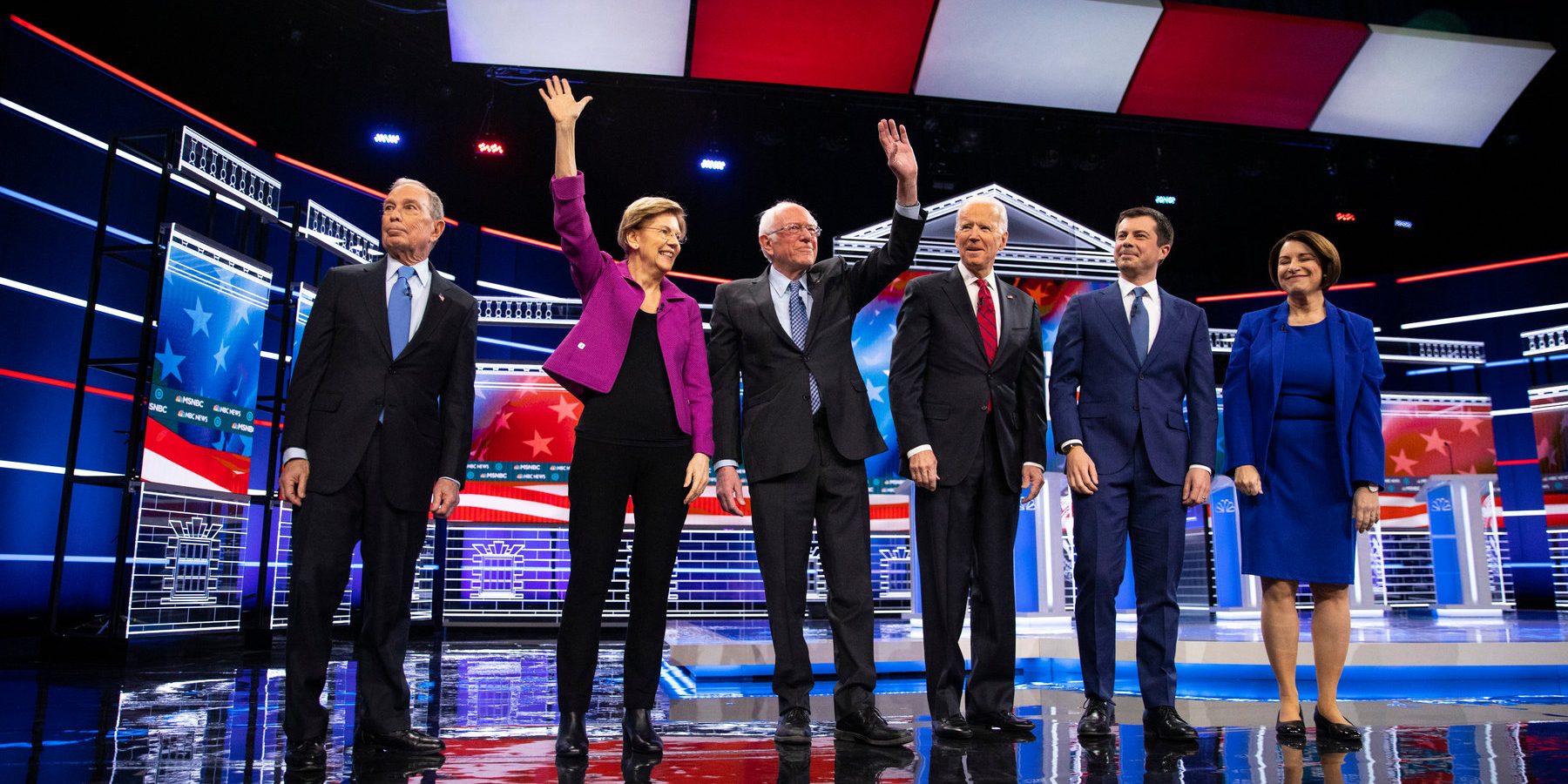 Does the ex-NYC Mayor serve an important function for the other Democratic hopefuls?

The latest Democratic Primary debate was a cringe-worthy affair, even more than US political “debates” usually are, it left you with one burning question – Why is Michael Bloomberg in this race?

As all the Democratic candidates rush to outdo each other in terms of identity politics, wokeness and – for want of a better word – “leftist” credentials…why has a billionaire, highly unpopular former mayor thrown his hat into the ring? He must have know he was going to be a massive target last night.

And, indeed, he was.

They all took shots. Obviously Bernie Sanders was going to strike back after Bloomberg criticised him throughout the build-up to the debate. But Warren, Buttigieg and even Biden chimed in, too.

Bloomberg was attacked on racism and sexism and his tax returns. It became a feeding frenzy, with both the liberal mainstream media and the alternate media celebrating the ritual slaughter as if Bloomberg’s blood was going to bring the sun back and guarantee a good harvest.

The Guardian reported that Bloomberg was “roundly attacked by rivals in fiercest Democratic debate so far”. CNN compared him to Donald Trump (the worst rebuke in their lexicon). MSNBC declared him “unprepared and unequipped”.

Even some from the alternate media were enthused by the Bloomberg free-for-all:

We got ourselves a debate!

41 people are talking about this

161 people are talking about this

Everyone agrees – Bloomberg was a disaster, and Warren (especially) was “historic”.

The Intercept wrote a glowing write up of Warren’s performance, including this key paragraph:

When Mike Bloomberg sauntered onto the debate stage, the old Elizabeth Warren reemerged, turning in a historic debate performance that left the former New York City mayor a politically bloodied mess. Bloomberg, it turned out, was the foil Warren needed.

The Guardian picked up that it had been a successful night for Warren too, highlighting in separate article “Elizabeth Warren’s strong debate performance inspires best fundraising day yet”:

Warren, who repeatedly excoriated billionaire rival Mike Bloomberg during the Nevada debate, enjoyed the best fundraising day of her entire campaign on the back of the event. The Massachusetts senator raised $2.8m in donations on Wednesday, according to her campaign team.

“The foil Warren needed”. Quite.

Funny how that works out.

So was this a real debate? Is putting Michael Bloomberg in the stocks for an evening a real political discussion? Was there any genuine progress of rational argument and philosophical debate last night?

I didn’t see any. I saw a live action puppet show.

Accepting the surface level narrative of this campaign is naive in the extreme. Remember how contrived politics is – most especially American politics. Remember that the DNC fixed the primaries last time around, and fed the debate questions to Clinton early.

There’s no reason to think that kind of manipulation isn’t still going on. We should assume it is as a baseline.

In fact, we’ve seen signs of it already. They went out of their way to exclude Tulsi Gabbard, and then changed the rules at the last minuteto include Bloomberg. Why did they do that?

Because the DNC want a billionaire with accusations of sexual harassment and tax avoidance to run against Trump? Of course not.

No, what happened on that stage was, fittingly enough, a piece of theatre. Bloomberg is cast as the villain, and we all boo and hiss as he ties a pretty damsel to the railway lines, and then cheer when Uncle Joe and Aunt Liz turn up in the wokemobile, bonk him on the nose, and save the day.

As we said last night:

Bloomberg definitely there to serve a function. It couldn’t be more obvious if they’d put an actual straw-man on the stage, hung a sign that says “the elite” around its neck, and had Warren & Biden run at it with bayonets.

Bloomberg boosts everyone else on the poll, he is “exactly the foil they need”. Like everything else in the media, it’s about narrative management.

Bernie Sanders isn’t going to change anything, he’s demonstrated with his foreign policy speeches that he’s too timid to truly challenge establishment orthodoxy (that’s why people like Jonathan Freedland prefer him to Corbyn). But he’s at least slightly genuine. Slightly.

Sanders is winning this race, but more importantly he’s controlling the narrative – elevating dangerous ideas in the public mind, ideas that might live on in the minds and speeches of braver, more honest politicians. All this off the back of casting himself as a leftist outsider up against the right of the Democratic party. Bloomberg changes that conversation by putting another extreme on the right side.

Now Biden, Buttigieg and Warren are the sensible candidates in the middle, far more “leftist” than mean old Mike, but far more “electable” than crazy commie Bernie. The rational compromise.

(Sidenote – I haven’t totally ruled out that the DNC end up letting Sanders win the nomination – I think the endgame here might be to have Sanders run against Trump, get his ass kicked, and declare that “Americans don’t want socialism” and all leftists are “unelectable”. Here in the UK we call that “being Corbyned”).

Secondly, there’s the total undermining of the idea of “debate”, which is becoming more childish every cycle. Bloomberg’s presence on that stage guaranteed no real issues were ever discussed. Instead we had supposedly adult politicians exchanging cheap jibes and “sick burns” in the hopes of pleasing their cheerleaders on twitter. Reality was barely touched upon, and that’s just the way they like it.

Politics is becoming just Big Brother or Love Island only with better suits and bigger budgets. No thought, no rational argument, just pick a team, tweet a hashtag, cheer your side. Last night was as real as a WWE bout, and couldn’t have been more obviously stage-managed if Mike Bloomberg had entered to the sound of breaking glass and Lester Holt declaring “By gawd, that’s Bloomberg’s music!”

Bloomberg has already benefited the field simply by providing a distraction from the Iowa chaos. As an even richer member of the “elite” than the rest of the ballot he acts as an anger heat-sink, with many so happy to see the corrupt billionaire taken down a peg they don’t realise they’re cheering for Joe Biden, or Liz Warren or Pete Buttigieg or even that other brunette whose name no one remembers.

Further, with his frequent attacks on Sanders he can torpedo the favourite (and only even vaguely genuine threat) by using smear tactics, whilst the real DNC picks keep their hands clean (they may even halfheartedly defend Bernie, acting outraged whilst reaping the benefits).

Lastly, there’s the game of identity politics. A lot of political discourse these days is about billionaires, some constantly attack them, others defend them as heroes of aspiration, but both these sides individualize inequality. Turning it into the malign result of the exceptionally self-interested, rather than the natural by-product of system designed to draw all the profits to the top. Billionaires are just the heads of the hydra, cut one off and two more will take its place.

Discussing the personal wealth of Person A or the tax of Person B isn’t the real issue, and letting it become so leaves you open to soft appeasement. If the problem is just “billionaires”, rather than the system, then the establishment can cut a disposable member of the club off at the knees, feed him to the braying mob, and pretend we’ve made some strides toward progress.

Which is actually a pretty fair description of what happened last night.

Whatever the final result of the race, Bloomberg won’t win, and his entry to the race has already proved a shot in the arm to establishment candidates right across the DNC board. It’s hard not to see that as a contrivance.

And whilst kicking someone like Bloomberg while he’s down might feel good, in this case it’s singing harmonies with the mainstream chorus. And that’s never a good idea.