Everyone who has ever dreamed of telling people what to do, backed up with the power of the state, is crawling out of the woodwork. From  Graham Dockery at rt.com: 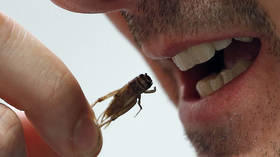 An employee eats a cricket at the Micronutris plant in Saint Orens de Gameville, southwestern France, February 24, 2014 © Reuters / Regis Duvignau
The coronavirus pandemic is already triggering a massive upheaval in the way we live. But amid the chaos, extreme liberal social engineers are plotting fresh attacks, hoping to upend even the things many of us take for granted.

In little over two months, governments across the Western world have granted themselves the power to place their entire citizenry under house arrest, all in the name of fighting the coronavirus. From the British constabulary breaking up illegal picnics, to American law enforcement seeking the power to detain indefinitely without trial, civil liberties have been assaulted in every corner of the free world.

Will the trade-off be justified? Only time will tell. However, just as governments have flexed their authoritarian muscles, the media and academia have already decided how they want the post-coronavirus world to look, and it’s a hellish dystopia.

Feminize if you want to live

Relatively little is known about the virus, and some of its characteristics – like the AIDS-like attack on the immune system it causes – have baffled scientists. However, the pathogen seems to pose a greater threat to men than women. Armed with this fact, the New York Times decided on Monday that pumping men full of female sex hormones could be a cure.

To be fair, scientists are only studying this as a potential avenue of treatment, yet the Times never once questioned the idea of chemically castrating half the population to stop the bug. Men, it says, will get used to “tenderness in the breast and hot flashes.”