The last thing that the world’s many underfunded pensions need is bear markets in either stocks or bonds. Can central banks save their bacon? From Tyler Durden at zerohedge.com:

The Organization for Economic Co-operation and Development (OECD) recently published a report showing how pension funds in OECD countries recorded a massive loss of approximately $2.5 trillion during the stock market meltdown in February through late March. Shortly, after that, central banks intervened with monetary cannons to rescue stock markets and other financial assets to avoid pension returns from going negative.

The spread of COVID-19 worldwide and its knock-on effects on financial markets during the first quarter of 2020 are likely to have reversed some of these gains. Early estimates suggest that pension fund assets at the end of Q1 2020 could have dropped to USD 29.8 trillion, down 8% compared to end-2019 [or about a $2.5 trillion loss]. 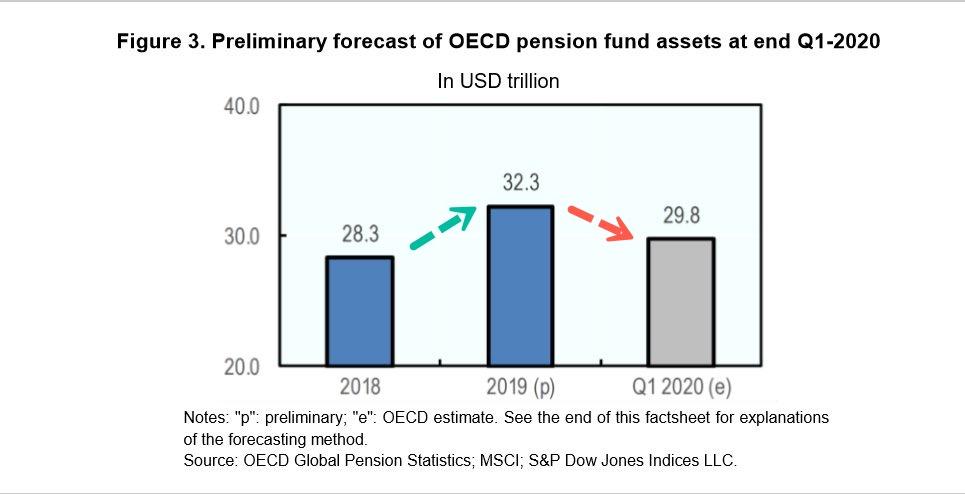 The drop in pension fund assets is forecast to stem from the decline in equity markets in the first quarter of 2020. Returns, inclusive of dividends and price appreciation, were negative on the MSCI World Index in the first quarter of 2020 (-20%), and between -11% and -24% on the MSCI Index for Australia, Canada, Japan, the Netherlands, Switzerland, the United Kingdom, the United States.

Bloomberg’s Lisa Abramowicz pointed out in a tweet, “this report [referring to the OECD report] shows the massiveness of pension assets & points to why central banks are tethered to bailing out markets: social infrastructures depend on their not going down too much.”

2 responses to “Central Banks Bailed Out Markets To Avoid Trillions In Pension Losses, by Tyler Durden”