A Rogue Institution and a Clear and Present Danger to Liberty in America, by David Stockman

A central bank is completely incompatible with a free society. From David Stockman at internationalman.com:

We have never heard more gibberish, double talk, and lies from one podium than we have from Fed Chairman Powell.

There is no other way to say it: The Fed has become a dangerous rogue institution that has usurped plenary power over the financial system.

This is all based on implicit theories that eventually lead to a massive speculative blow-off, even as it sucks the vitality out of the Main Street economy in the interim.

The implicit theory is brazenly simple: The Fed believes that relentless credit expansion fosters greater economic growth and full employment. It believes that there is no practical limit to how much debt the household, business, and government sectors of the economy can tolerate or any notable adverse trade-offs from ever-higher leverage ratios.

When economic growth falters for any reason, the Fed’s first action is to push rates even lower. This ratcheting process has gone on for more than three decades, and interest rates have, for all practical purposes, been obliterated.

The chart below takes all the short-run bobbing and weaving out of the GDP data by showing the rolling 20-year average of annual growth. 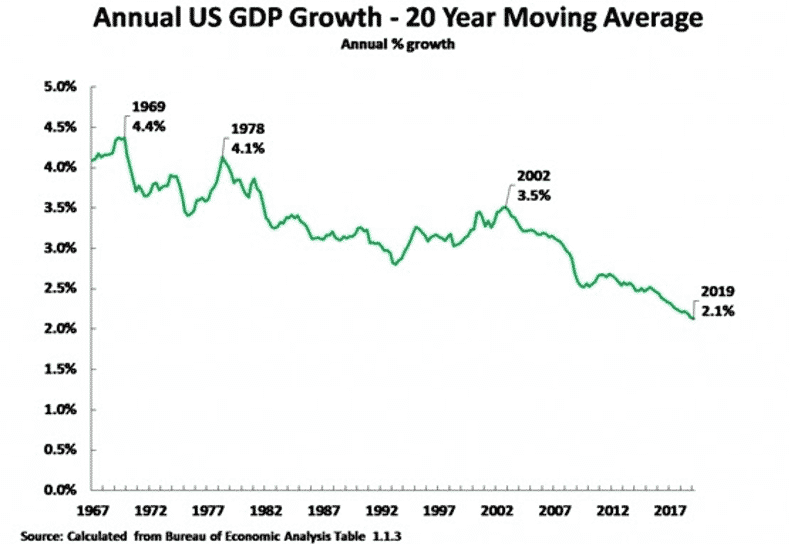 The above dismal trend line was not for want of trying with the debt elixir.

At the end of 1969, total public and private debt (blue area in the chart below) stood at $1.54 trillion, which has since mushroomed to, well, nearly $78 trillion!