It’s to ‘replace Joe Biden with Kamala Harris’: Trump reacts to Pelosi’s 25th amendment commission with claim of a hidden plot, from RT

That the Pelosi ploy is to set up the succession procedure for Joe Biden rather than President Trump is certainly a plausible possibility. From rt.com: 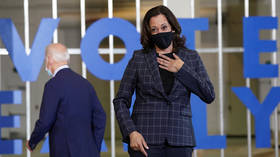 Soon after Rep. Nancy Pelosi introduced a commission that would allow Congress to remove a mentally unfit president, Donald Trump tweeted a claim its ulterior motive is to replace Democratic candidate Joe Biden with Kamala Harris.

“This is not about President Trump,” Speaker of the House Pelosi said when announcing the legislation on Friday. “He will face the judgment of the voters. But he shows the need for us to create a process for future presidents.”

Pelosi: ‘This is not about Pres. Trump. He will face the judgment of the voters. But he shows the need to create a process for future presidents … a president’s fitness for office must be determined by science and facts’ pic.twitter.com/H216enTxQX

Instead, the commission is needed to give “some comfort to people” about government stability, Pelosi (D-California) insisted.

Some, however, were not convinced the commission is meant as just an additional safety mechanism in the time of the Covid-19 pandemic. Pelosi’s assurance the legislation wasn’t about Trump has quickly sparked a theory that such a commission could be used to replace 77-year-old Joe Biden – whose own mental stability has been steadily questioned – should he win the election next month.

President Trump himself floated that theory on Twitter shortly after Pelosi’s announcement.