Bond Market Has Been Clueless about Inflation for Decades, Now More so Than Ever. The Meme the Drop in Yields = End of Inflation is a Fantasy, by Wolf Richter

Bonds are probably the worst investment out there, but even if they’re not, they certainly make the top three. From Wolf Richter at wolfstreet.com:

Even before QE, the 10-year yield lagged years behind CPI, up and down. And now, the Fed manipulates the market with QE.

But the new meme now is that the drop in the 10-year Treasury yield is telling us the spike in inflation is nothing to worry about, and that by next early year, CPI will be at 1% or 1.5% or whatever. The meme now is that the bond market is right and CPI is wrong or something. 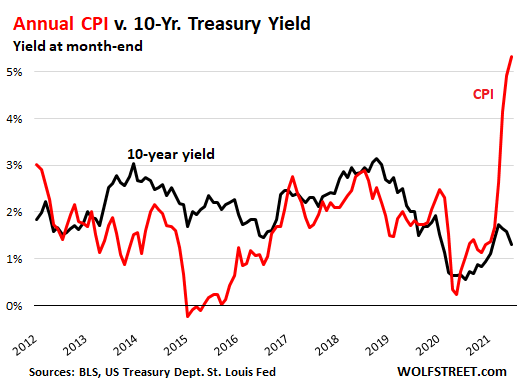