Havoc by Ping: The Unbearable Madness of the COVID Circus, by Vasko Kohlmayer

Great Britain has a nifty new app. If you come into proximity with anyone who has recently tested positive for Covid-19, you have to quarantine for ten days. It doesn’t matter if you’ve acquired immunity via the disease or the shots, it’s 10 days hard time for you! From Vasko Kohlmayer at lewrockwell.com:

As July 21 – dubbed “Freedom Day” – was nearing in England, the vast British Covid lobby was in full-fledged panic.

For weeks they had been doing their very best to sabotage the easing of Covid restrictions. Their primary tactic was feverish reporting on the growing number of cases caused by the so-called Delta variant. What they did not say was that this variant appears to be largely harmless at this time in this part of the world, as deaths from Covid in England have fallen by more than 95 percent from their January peaks.

The BBC and other corporate media never showed the graphic below which documents the dramatic decline of Covid deaths over the last five months: 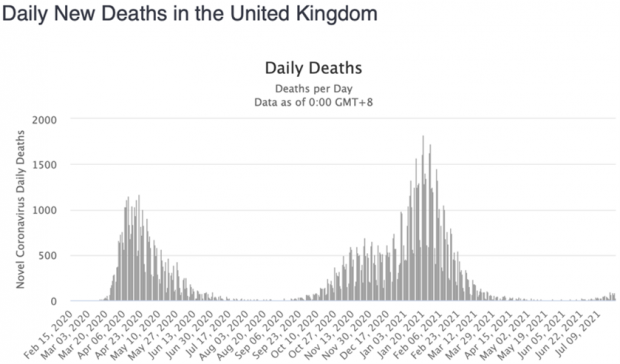 By the way, the information presented above is drawn from government data and most of those few “Covid deaths” are not really Covid deaths but deaths from other serious co-morbidities.

Notice the curve follows last year’s trajectory. This trajectory is similar to those in the US and other countries in the Northern hemisphere that have a moderate climate. With the arrival of more sunshine and warmer weather from March through October, SARS-CoV-2, like other viruses in its family, apparently loses its deadly sting.

Furthermore, if you believe what the British government said at the outset of its vaccination campaign, the country should be out of the Covid woods for good, given its high inoculation rates. Most of the vulnerable and those over 50 years of age have already received their two shots. And many of those who have not been jabbed have overcome Covid and thus have natural antibodies.