The Extra $300/Week Unemployment Benefits Encouraged Many to Not Work: Details about the “Labor Shortage” Pile Up, by Wolf Richter

Whatever happened to the endlessly repeated bromide that nobody wanted to draw welfare and unemployment, and everyone so doing would take a job if any were available. The Covid affair has blown that one sky high. From Wolf Richter at wolfstreet.com:

Business owners and hiring managers have known this in their gut for months.

At the end of June, Texas and Florida joined the group of states that ended the extra $300 a week (the Enders). These states are still paying the regular state unemployment benefits; only the federal top-off $300 a week was ended. Since the end of June, the combined “continued claims” (the number of people having claimed unemployment insurance for more than a week) of the 27 Enders dropped by 25%.

Over the same period, the continued claims by the states that kept the extra $300 a week (the Keepers) dropped by only 11%. In other words, continued UI over just those weeks since the end of June dropped over twice as fast in states that had ended the extra benefits: 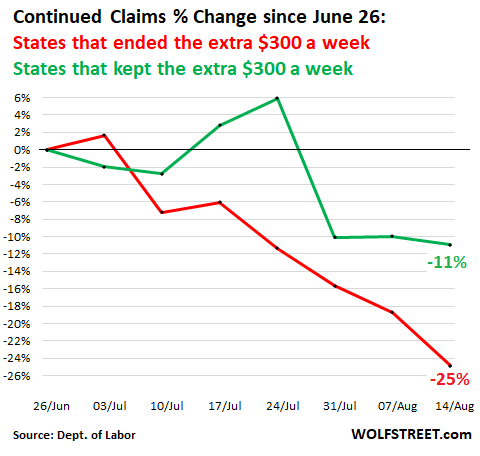