Farm equipment is scarce and pricey. The John Deere strike has farmers worried. By Phil McCausland

This is a representative instance of what’s going on out there in the real economy. From Phil McCausland at nbcnews.com, h/t Hardscrabble Farmer at The Burning Platform:

Farmers say they sympathize with the desire for better wages, but they face equipment and parts shortages. A long strike could affect the food supply chain and their bottom lines.

Joel Everett said he was astounded when a lightly used 2009 John Deere tractor sold at his last auction in Strawberry Point, Iowa, for tens of thousands of dollars more than it had cost fresh off the production line more than a decade ago.

Bought new for $109,000, the tractor sold for $143,000 at auction, he said. It’s not an isolated incident, said Everett, who has run Joel’s Tractor and Auction since 1992. A lot of farm equipment, particularly used tractors, is selling for 30 percent to 50 percent more than it was two years ago at his auction house.

“It’s been unreal,” Everett said. “Our last sale was the biggest dollar sale we ever had, and we’re fixing to have another in three to four weeks that’s going to blow that one away.”

Quality farm equipment is getting hard to find amid the supply chain shortage, many farmers and experts said, and its scarcity is driving up prices and raising questions about whether farmers’ harvests and next year’s planting season could be affected.

In a few decades France will be more Islamic than anything else. From Guy Millière at gatestoneinstitutue.org:

Social Security: Whistling Past The $96 Trillion Graveyard, by Lance Roberts

Social Security has a problem. As Democrats push to expand entitlements to include free preschool and subsidized child care, little attention is getting paid to Social Security is a financial trainwreck.

“The program’s payouts have exceeded revenue since 2010, but the recent past is nowhere near as grim as the future. According to the latest annual report by Social Security’s trustees, the gap between promised benefits and future payroll tax revenue has reached a staggering $59.8 trillion. That gap is $6.8 trillion larger than it was just one year earlier. The biggest driver of that move wasn’t Covid-19, but rather a lowering of expected fertility over the coming decades.” – Stark Realities

When President Roosevelt first enacted social security in 1935, the intention was to serve as a safety net for the elderly. However, at that time, life expectancy was roughly 60-years of age. Therefore, expectations were that participants would not be drawing on social security for very long from an actuarial basis. Furthermore, roughly 16-workers paid into social security for each welfare participant.

Of course, given that politicians like to use government coffers to buy votes, additional amendments got added to social security to expand the participation in the program. Such included adding domestic labor in 1950 and widows and orphans in 1956. They lowered the retirement age to 62 in 1961 and increased benefits in 1972. Then politicians added more beneficiaries, from the disabled to immigrants, farmers, railroad workers, firefighters, ministers, federal, state, and local government employees, etc.

While politicians and voters continued to add more beneficiaries to the welfare program, the number of workers steadily declined. Today, there are barely 2-workers for each beneficiary.

How the Fed Killed Growth and Mugged the Hamburger Instead, by David Stockman

The Fed has robbed savers, driven U.S. manufacturing to places like China and Mexico, facilitated the government’s debt binge, and debased the dollar’s purchasing power. Other than that, it’s done a great job. From David Stockman at lewrockwell.com:

Recently, it was reported that US industrial production rose in April for a fourth consecutive month, and owing to a jump in auto assemblies was up 1.1% from March and 6.4% versus prior year. So the usual suspects were out beating the Wall Street tom-toms about economic strength and no recession on the horizon.

But as demonstrated in the chart below, what we are mainly getting once more is born-again production, not net growth. That is, remove the April 2020 Lockdown swoon and scroll back to the interim high in December 2014 and what do you get? 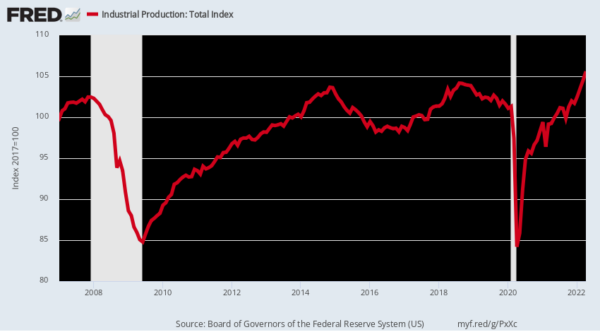 So, no, the US industrial economy is not strong—it’s been flatlining for the better part of the current century. And that’s something new under the sun, not in a good way.

Many of the pilots who were forced to choose between the jab and their job are gravely ill and regretting their choice. From Michael Nevradakis, Ph.D. at childrenshealthdefense.org:

In interviews with The Defender, pilots injured by COVID-19 vaccines said despite a “culture of fear and intimidation” they are compelled to speak out against vaccine mandates that rob pilots of their careers — and in some cases their lives.

As a commercial pilot, Bob Snow had long looked forward to seeing his daughter follow in his footsteps by helping her learn to fly an airplane.

However, having received the COVID-19 vaccine “under duress,” this dream is no longer a possibility for Snow.

Snow is one of a growing number of pilots coming forward to share stories of injuries they experienced after getting a COVID-19 vaccine.

Some of these accounts are “hair-raising and deeply disturbing,” according to Maureen Steele, a paralegal and head of media relations for the John Pierce Law Firm.

The firm represents U.S. Freedom Flyers (USFF), an organization opposing vaccine and mask mandates for pilots and airline staff, in a series of legal actions against the U.S. Federal Aviation Administration (FAA) and several airlines.

The airlines might make offering bus service than they do with planes. Intercity bus companies generally make money, while airlines often lose tons of it. From Tyler Durden at zerohedge.com:

As gas prices continue to rise into the peak driving (and flying season), expect to see more bizarre twists in conventional behavior… like airlines offering bus service in place of connecting flights. 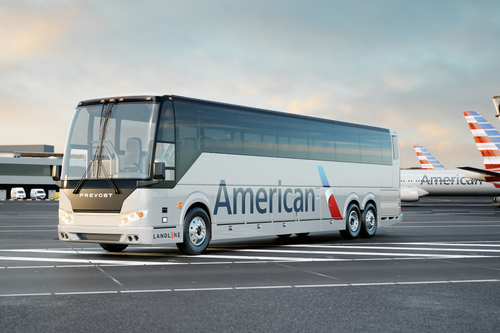 Passengers traveling to or from Philly, Allentown or Atlantic City will be able to book connecting itineraries through American, according to The Points Guy: travelers whose trips begin in Allentown or Atlantic City will check their bags and go through security as if they were taking a normal flight. However, passengers will board a bus rather than a flight to Philly, where they will be dropped off at their terminals without having to go through security again. Bags will be automatically transferred to their connecting flights. Similarly, travelers landing in Philly will head to a dedicated gate from where the bus will pick up. Bags will be automatically transferred to the bus.

Bonfire of the Governments, Part Two, by Robert Gore

Welcome to the bonfire of the governments, history’s greatest conflagration.

Think of an activity that’s essential for a government bent on subjugation: censorship and the suppression of expression. Governments on both sides of the present conflict have further jacked up their efforts to control expression from the plateau reached with Covid. Russia just passed a law imposing a 15-year prison sentence for anyone spreading “fake news” about its invasion of Ukraine. The U.S. and European governments and lapdog legacy and social media have blanketed populaces with official propaganda. Just as with Covid, questions and deviations from the approved narrative are stifled, censored, and punished.

It was all so much easier back in the post World War II, pre-internet good old days. In the U.S. and Europe, there were several “papers of record” that had been infiltrated by intelligence agencies, and state-licensed radio and television stations. In the Soviet Union there wasn’t even that, just a few official propaganda organs.

Yet even with that degree of control, government repression wasn’t wholly effective. In the U.S. the truth got out about the Vietnam War. The Soviets could stop everything but people talking with each other, albeit in hushed tones. The cynical humor became legendary. (“They pretend to pay us, we pretend to work.”) Humor always contains an element of truth, which is why statists can’t do humor. The number of citizens red-pilled to Soviet corruption and incompetence and the comparative freedom and wealth of the West reached critical mass and the government fell. It took way too long, but it happened.

Today, there are billions of potential journalists and video producers—anyone with a cell phone and access to the internet—and trillions of text and email communications. People still occasionally engage in face-to-face conversations. The infrastructure needed to monitor all this is complex, gargantuan, and costly. Only algorithms and artificial intelligence can sort through it to identify threats to the state. Once identified, a separate infrastructure is necessary to apprehend, arrest, process, incarcerate and perhaps execute those engaged in wrongthought, wrongspeak, wrongwrite, and wrongact.

END_OF_DOCUMENT_TOKEN_TO_BE_REPLACED

In a process that’s well on its way, the welcome mat has been put out for immigrants and it’s become almost impossible to define a recognizable America or American ideology. Soon, they won’t exist at all. From Philip Giraldi at unz.com:

A country that cannot control its own borders cannot survive There is new evidence of how the Biden Administration’s total disregard for reality evident in its blundering its way into war with Russia has severely damaged what once used to be referred to as national security. And while the White House and its media barking dogs continue to push the false argument that Russia’s intervention in Ukraine is somehow a threat to the United States, many thousands of illegal immigrants and alleged political refugees continue to enter the country under the radar without any serious attempt being made to determine if the flood of new arrivals is in any way beneficial.

This flow of illegals will undoubtedly increase dramatically with the fighting in Ukraine, which will produce the usual wave of refugees, most of whom will likely be Jewish based on the reality of who has power in Washington DC and will be able to influence the selection process. British Prime Minister Boris Johnson has already declared that his country is prepared to welcome thousands of Ukrainian refugees and he has predictably appointed a Jewish former Member of Parliament as government minister to lead the effort. Appointee Richard Harrington is also a former head of Conservative Friends of Israel.

There have been reports that claim Ukrainians, aided by charities in the US, are already heading towards Mexico in significant numbers, buying up cheap used cars and heading north to the border to claim asylum. As this development continues and accelerates, the shifting demographics which have already changed the character of the nation will almost certainly do more damage to the economy and the cultural and political cohesion of the United States.

10 Signs the War in Ukraine is part of the Great Reset, by A Special Correspondent

Is the Ukraine-Russia war the coup de grâce of the Great Reset? From a special correspondent at off-guardian.org:

Welcome to the second phase of the Great Reset: war.

While the pandemic acclimatised the world to lockdowns, normalised the acceptance of experimental medications, precipitated the greatest transfer of wealth to corporations by decimating SMEs and adjusted the muscle memory of workforce operations in preparation for a cybernetic future, an additional vector was required to accelerate the economic collapse before nations can ‘Build Back Better.’

I present below several ways in which the current conflict between Russia and Ukraine is the next catalyst for the World Economic Forum’s Great Reset agenda, facilitated by an interconnected web of global stakeholders and a diffuse network of public-private partnerships.

As geopolitical tensions morph into a protracted conflict between NATO and the Sino-Russia axis, a second contraction may plunge the economy into stagflation.

In the years ahead, the combination of subpar growth and runaway inflation will force a global economic underclass into micro-work contracts and low-wage jobs in an emerging gig economy.