The First Libertarian, by Jeff Thomas

Lao-Tzu sounds like my kind of guy. From Jeff Thomas at internationalman.com: 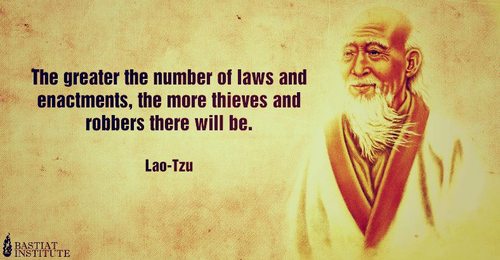 Most libertarians count Murray Rothbard as one of their mentors. They will know that Rothbard’s primary mentors were Ludwig Von Mises and Friedrich Hayek. But Rothbard dug deeper in his search for libertarian thinking. Here is a little-seen paper that he wrote in 1967:

The first libertarian intellectual was Lao-tzu, the founder of Taoism. Little is known about his life, but apparently he was a personal acquaintance of Confucius in the late sixth century BC and like the latter came from the state of Sung and was descended from the lower aristocracy of the Yin dynasty.

Unlike the notable apologist for the rule of philosopher-bureaucrats, however, Lao-tzu developed a radical libertarian creed. For Lao-tzu the individual and his happiness was the key unit and goal of society. If social institutions hampered the individual’s flowering and his happiness, then those institutions should be reduced or abolished altogether. To the individualist Lao-tzu, government, with its “laws and regulations more numerous than the hairs of an ox,” was a vicious oppressor of the individual, and “more to be feared than fierce tigers.”

Government, in sum, must be limited to the smallest possible minimum; “inaction” was the proper function of government, since only inaction can permit the individual to flourish and achieve happiness. Any intervention by government, Lao-tzu declared, would be counterproductive, and would lead to confusion and turmoil. After referring to the common experience of mankind with government, Lao-tzu came to this incisive conclusion: “The more artificial taboos and restrictions there are in the world, the more the people are impoverished… The more that laws and regulations are given prominence, the more thieves and robbers there will be.”