We’re forcing masks on little kids who have next to no risk of getting Covid, but much higher risk celebrities carry on without them at their gatherings, sometimes with the politicians who make the rules. We live in the Age of Hypocrisy. From Eric Peters at ericpetersautos.com:

On the one hand, this enraging video of a toddler being practically suffocated by his handlers at a day-care center. The Diaper – for his face – being repeatedly forced on the kid’s face, because every kid must be trained to wear the Rag of Submission.

On the other hand, the Emmys – and nary a face-effaced. It was a true Marie Antoinette Moment. The poor French queen may have never actually said, “let them eat cake.”  But the elites without question expect us to efface our faces – and tolerate the abuse of children.

Keep in mind that kids like the one being tormented in the video above face about the same risk of dying from the ‘Rona as they do of being struck by lightning. The odds are literally on the order of one in a million. 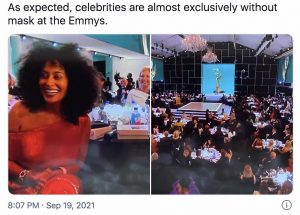 As contrasted with the much greater risk presented by a crowd of middle-aged and older Hollywood celebrities, many of them overweight (some morbidly so) gathered together in close quarters, indoors – celebrating their own narcissistic wonderfulness. Many of these celebrities (e.g., Jennifer Anniston, Tom Cruise) having publicly lectured the little people about the importance of “masking” and Jabbing.

Which may be why We, the Little People are expressing our opinion of it – as in Australia the other day. The mercenaries of the Sickness Regime – the metastasized iteration of what was once upon a time the police, the people who dealt with criminals – as opposed to being the enforcers of criminality – were on the receiving end of some palliative treatment, at the hands – and fists – of the little people.