A Gentle Reminder: Lehman Was Not ‘A Moment’, by Peter Tchir

The world financial system was going to crash in 2008 with or without Lehman. From Peter Tchir at Academy Securities via zerohedge.com:

Everyone seems to be talking about the Lehman Moment again this week.

While there is a debate around whether Evergrande is a Lehman Moment or not, that misses the crux of the problem, Lehman never was a “moment” at least by any standard definition of “moment”. The Lehman bankruptcy was an important event, maybe even a seminal event during the Great Financial Crisis, but it was not a “moment”. I cannot tell why, of all the important events that occurred during the Financial Crisis, and leading up to it, the nation has embraced this concept of the Lehman Moment? Maybe because it has the beauty of pinning the blame on a now non-existent Wall Street firm? It is always nice to have a scapegoat, a single moment in time or person that you can blame, especially when that person or entity isn’t well regarded. Lehman seems to fit the bill well. Much better than blaming it on individuals taking out NINJA loans (the No Income No Job Application loans were one of my favorite terms of the crisis). Maybe we don’t want to blame any other number of actors that failed before or after Lehman for their mistakes, because they hit too close to home (i.e., maybe we as a nation would have to shoulder more blame). Maybe too many of the surviving actors don’t want to be associated with their part of the crisis, so they too like to pin it on Lehman. It is probably too difficult to go back in time and argue that some policies from D.C. may have contributed to the problem (worth thinking about in an era where D.C. seems to “know” better than we do, what we need). There are a lot of reasons why the Lehman Moment has caught on, I just don’t think it is accurate. I have not seen one single report explaining why Lehman going bankrupt or not would have affected the price of homes in Las Vegas.

I believe, that had Lehman been “saved” the problems we faced would still have been result, we just would have taken a more circuitous route. That an inexorable chain of events had been started before Lehman and would have continued regardless of saving Lehman or not. 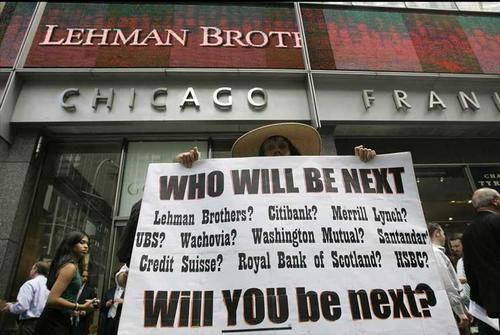