Europe After Angela Merkel: Is The Atlantic Era Over? by James Carden

Are European countries tired enough of being US government poodles that they form a military alliance with teeth and occasionally tell Washington to go jump in a lake? From James Carden at zerohedge.com:

Just what shape Germany’s governing coalition will take is still unclear in the aftermath of the September 26 election, which saw the Social Democrats (SPD), led by finance minister Olaf Scholz, come away with just over a quarter of the vote, at 25.7 percent. The balance of power in Germany is now held by the Greens and the Free Democrats, which, taken together, received more votes than the victorious SPD or the Christian Democratic Union, the party of outgoing Chancellor of Germany Angela Merkel.

The one thing that is certain is that after 16 years in power, Merkel will soon exit the scene. So the question that now arises is: What shape will post-Merkel Europe take?

Any answer must begin with an eye on the Élysée Palace, as French President Emmanuel Macron is set to become the senior most partner in the Franco-German partnership that has steered the EU since its founding in 1993. 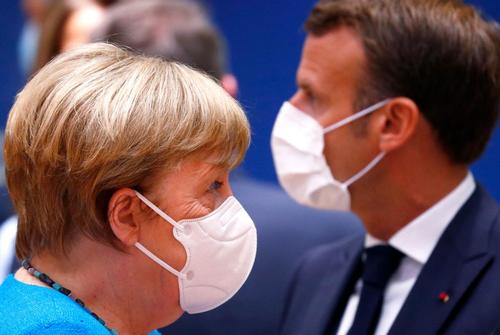 There may be major changes afoot should Macron, motivated by the insult handed to him by the United States, the UK and Australia with AUKUS—a new trilateral security alliance—pursue his oft-stated desire for European strategic autonomy. As former State Department official Max Bergmann recently observed, AUKUS served to “empower stakeholders in Paris who advocate for a much cooler relationship with Washington and—tapping into the Gaullist foreign policy tradition—wish to be allied with the United States, but not necessarily aligned on key issues related to Russia and China.”