Hundreds Of Thousands To Go On Four-Day Nationwide Strike Over Vaccine Mandates, by Enrico Trigoso

Let’s hope the final tally is a six or seven-figured number. From Enrico Trigoso of The Epoch Times via zerohedge.com:

A massive, nationwide strike against vaccine mandates will take place from Nov. 8 to Nov. 11, according to the main organizer for the walkout, Leigh Dundas, a human rights attorney and public speaker. 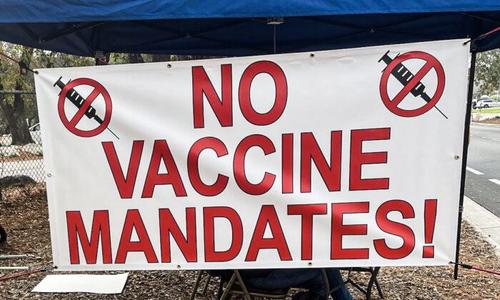 The event will kick off in Los Angeles on Monday. The locations of the marches have not yet been disclosed.

The walkouts involve people from various industries such as trucking and telecom. Air and rail transport workers are not federally allowed to go on strike due to a law passed in 1926 named the Railway Labor Act, but some plan to protest anonymously.

“The Golden Gate Bridge Rally is going to be an epic and unprecedented moment in time. It will mark—on Veterans’ Day evening—a 4-day Nationwide walkout, by rank and file workers everywhere, from blue-collar to white-collar, black, white, yellow, red, every faith, every creed, who are uniquely united despite their differences on one common truth: that vaccine mandates have no place in a truly free society,” Dundas told The Epoch Times.

“Every group: anti-vaccine, BLM, gay, straight, Jewish, Muslim, Native American, Asian, Latino, Christian, atheist—all groups—are coming together for this one historic moment in time—to trumpet not just to our own government, but indeed to the watching eyes of the world, that vaccine mandates will no longer be tolerated. That in this country, WE are the government, because our founding fathers knew this truth: a truly free nation is a nation of the people, by the people, and for the people. That we are the leaders we have been waiting for. And that today marks the day that we retire vaccine mandates as a concept that cannot live in a free society, and that we are, indeed, simply that: a free society.”