Labor Shortages Worsen, Companies Poach Workers from Each Other amid Massive Churn, by Wolf Richter

Wages are headed up along with most other prices and it’s a sellers’ market for labor. There are more positions than workers who want to fill them. From Wolf Richter at wolfstreet.com:

Job arbitrage in a labor market where workers have a lot more power than before.

These job openings are not based on job postings, but on a survey of 21,000 nonfarm business establishments and government entities by the Bureau of Labor Statistics, released today in its JOLTS report.

Hiring was also very strong – by far the best October ever – as companies filled job openings by poaching each other’s employees, offering higher pay, bonuses, and better benefits, leading to both, a large number of “hires” and a large number of “quits,” as people quit their old jobs to take up those better job offers, creating large-scale churn – a form of job arbitrage in a labor market where labor has a lot more power than before. 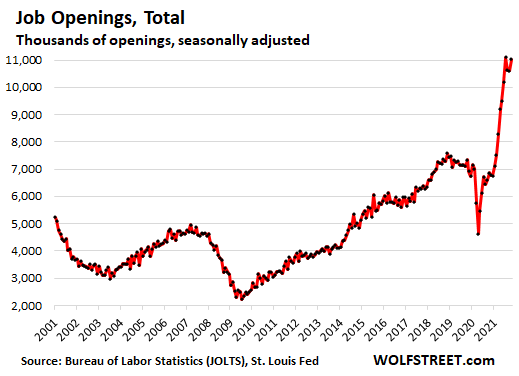