WOOSH, Shock-and-Awe Loss of Dollar Purchasing Power Hits Americans. Worst Inflation in 40 Years. Getting it Under Control Will Be a Bitch, by Wolf Richter

The inflation genie is well and truly out of the bottle. From Wolf Richter at wolfstreet.com:

The broadest Consumer Price Index (CPI-U) spiked by 0.8% in November from October, and by 6.8% from a year ago, the highest since June 1982, according to data released by the Bureau of Labor Statistics today. 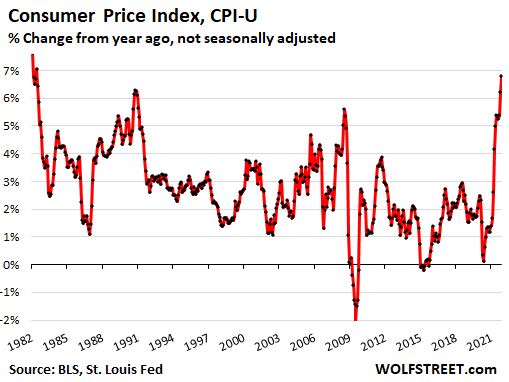 But it gets better. The Consumer Price Index for All Urban Wage Earners and Clerical Workers (CPI-W), the index upon which the Social Security COLAs are based, spiked by 7.6% in November year-over-year — exceeding even Mexico’s soaring inflation rate — and the worst since January 1982.