Parents Erupt At California School Board Meeting Over Alleged ‘Coaching’ Of Students Into LGBTQ Club, by Brad Jones

If you’ve got school age children, make sure you know what your district’s educational establishment is teaching them. From Brad Jones at The Epoch Times via zerohedge.com:

A mixed crowd of more than 150 people packed a school board meeting in Salinas, Calif., on Dec. 15 as frustrated parents clashed with supporters of two teachers accused of subverting parents and recruiting middle school students into a Gay-Straight Alliance (GSA) club. 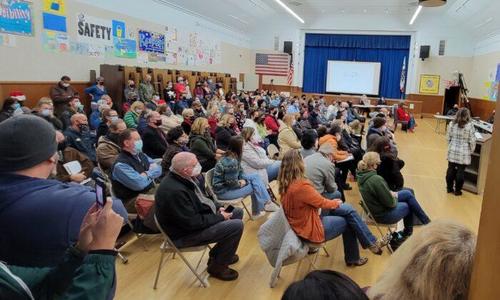 Jessica Konen, one of about 30 people who spoke during an extended public comment period, told the board that school staff indoctrinated her child and usurped her parental authority.

Konen blasted the board and accused teachers and staff of coaching her gender dysphoric daughter through the Equality Club, an LGBTQ+ support group now called the You Be You (UBU) Club at Buena Vista Middle School.

“I stand here today in front of all of you because I am outraged. Is this really barely coming to light? Are you guys serious?” she said.

Konen went public with her story after controversy erupted over an audio recording leaked to “Irreversible Damage” author Abigail Shrier and The Epoch Times that revealed two teachers at a California Teachers Association (CTA) conference dismissing parents’ concerns about homosexual and transgender indoctrination at school.

The two seventh-grade teachers from Buena Vista Middle School in Salinas, Calif., were recorded coaching other teachers how to hide the nature of Lesbian, Gay, Bisexual, Transgender, Queer, or Questioning (LGBTQ+) Clubs, also known as GSA clubs, from parents. They led a workshop called “How we run a ‘GSA’ in Conservative Communities” at the CTA’s “2021 LGBTQ+ Issues Conference, Beyond the Binary: Identity & Imagining Possibilities” in Palm Springs, Calif., from Oct. 29 to 31.