Unprecedented Inflation Setting Records, No End in Sight, by Sundance

Nobody is saying inflation is transitory anymore, and in fact it’s getting worse. From Sundance at theconservativetreehouse.com:

The Bureau of Labor and Statistics (BLS) has released the February capture of the current inflation situation {DATA HERE} – the results are alarming and unfortunately will get worse.

The February rate of inflation was 0.8% (adjusted), an increase from the prior month (Jan 0.6%), and the calculated year-over-year inflation rate is now 7.9 percent and climbing fast.   There are some important indicators and aspects that need to be emphasized.  [Modified table-1 graphic] 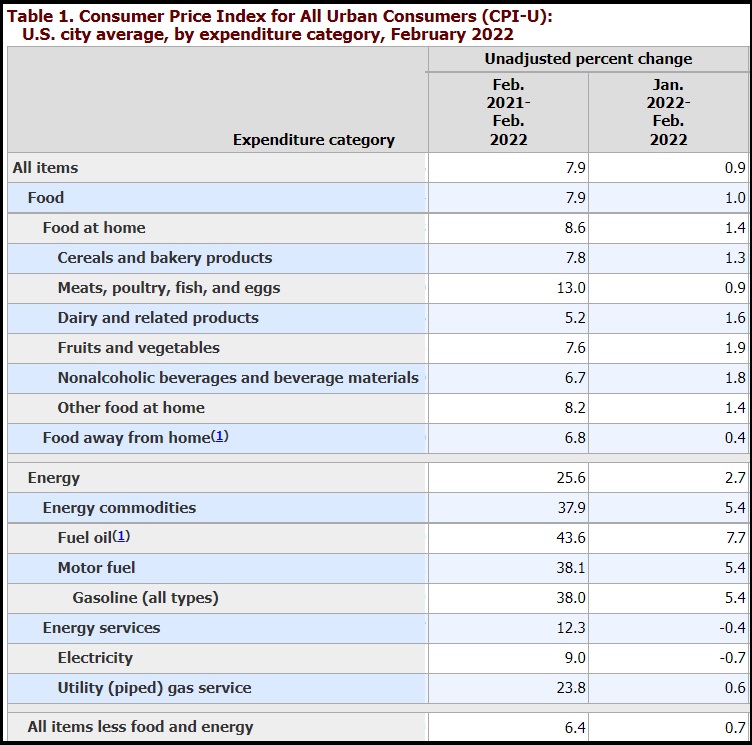 First, the capture of the current February data was BEFORE the Russia-Ukraine crisis came into play.  Despite the White House attempting to justify the release data today by blaming it on Russia-Ukraine influence on oil and gas prices, the data itself was assembled before the recent spikes in oil and gasoline.  This is an important distinction, because that means what is coming next is even higher.

Second, what is surfacing now in the data is what we previously outlined in October and November as the inflation hurricane heading our way.  All of this was predictable, given the nature of the inflation, at all three stages of the supply chain (raw material, intermediate and wholesale).

The price of goods is still rising inside the supply chain, and the rate of petroleum price increases (energy and transportation) is making the final products even more expensive.