Editor’s Note: Below is part 1 of David Stockman’s article on the “climate crisis” and why governments are the real cause of the current economic issues.

“The Chief of the European Central Bank (ECB) has said that climate change is behind soaring inflation, stating that droughts and famines are driving up prices.

“If more and more climate disasters, droughts, and famines occur throughout the world, there will be repercussions on prices, on insurance premiums, and on the financial sector,” Lagarde said. 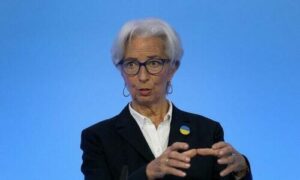 No, what we actually need to take into account is that the so-called Climate Crisis is complete hogwash, starting with the basics of so-called man-made global warming. The fact is, the present era is one of the coolest and least carbon-intensive periods of the last 600 million years.

Stated differently, the true science makes mincemeat of the elitist narrative espoused by Lagarde, officialdom through Europe and North America and the mainstream media. Yet it is now being used as an excuse for the unfolding economic disasters caused by the central banks and the Warfare State and a pretext for new rounds of authoritarian suppression of economic liberty exemplified by California’s recent move to outlaw combustion engine autos after 2035.

Indeed, the geological and paleontological evidence overwhelmingly says that today’s average global temperature of about 15 degrees C and CO2 concentrations of 420 ppm are nothing to fret about, and even if they rise to about 17-18 degrees C and 500-600 ppms by the end of the century, it may well on balance improve the lot of mankind.