Shellenberger: Biden Is Failing The World

Energy is essential to life, and as Europeans will discover this winter, it’s absence can mean death. From Michael Shellenberger at zerohedge.com:

Below is the written transcript of the above video. Additional slides and graphs are in the video.

Many people in the U.S. are still unaware of just how dire the situation is in Europe. They have started logging their old-growth forests for wood fuel to stay warm during the winter. You can see in a tweet that just came out today from somebody in Denmark that “people are stealing each other’s wood pellets and their wood briquettes as soon as they’re delivered.” To make matters worse, “There’s constant reports of cars having their tanks drilled and their gas stolen.” Remember, it’s not even winter yet. Winter’s actually over 72 days away. So this is a very serious situation. 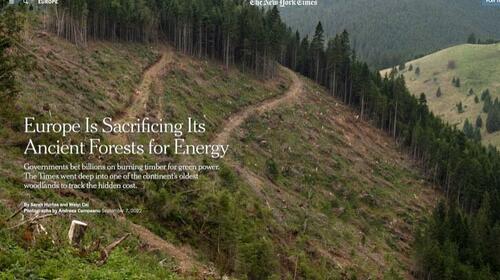 You can see that in Poland people are actually burning trash to stay warm. Burning trash in your fireplace creates toxic smoke. It’s hazardous. The government’s considering handing out masks so people can breathe more safely when they’re outdoors.

One response to “Shellenberger: Biden Is Failing The World”