Swamp is too nice a word for the fetid cesspool that is Washington, D.C. From Katie Spence at The Epoch Times via zerohedge.com:

The FBI raid on former President Donald Trump’s home at Mar-a-Lago is an escalation of an ongoing attack on anyone who dares to upset the political status quo in Washington, Rep. Warren Davidson (R-Ohio) says.

“I think a lot of my constituents were shocked, frankly, across the political spectrum. But obviously, the more supportive of President Trump, the more upset they were,” Davidson told The Epoch Times and NTD as part of a special report on the raid airing on Aug. 11 on EpochTV at 9 p.m.

“I think for anyone who doubted that there was a swamp when Donald Trump was saying ‘drain the swamp,’ now I think there’s true believers. So it’s historic.”

In support of his statement, Davidson pointed out that the FBI still has many of the same people who spent years supporting a Russia collusion narrative that was based on a falsified warrant.

Will the United States Exist After November? By Paul Craig Roberts

The odds of fair elections this November are small. Blatantly rigged elections may light the fuse. From Paul Craig Roberts at paulcraigroberts.org:

The Nazi serving as US Attorney General says he is going to get the warrant unsealed that he used as the justification for the aggressive invasion of President Trump’s home by a weaponized and politicized FBI, essentially frame up artists for the corrupt Democrat party.

The question the Nazi attorney general doesn’t answer, and the question the presstitutes studiously avoid asking, is why was the warrant containing the probable cause for the unprecedented invasion of an American president’s home sealed in the first place?

Little doubt the official explanation will be a lie, one that the presstitutes will repeat endlessly in their attempt to turn the lie into truth via repetition, just as they did with “Saddam Hussein’s weapons of mass destruction,” “Assad’s use of chemical weapons,” ad infinitum.

My take on the situation is that there is no probable cause.  Here is a scenario that can unfold. The FBI has carried off some boxes of documents to which they had prior access but no interest.  Once they decide on the nature of Trump’s frame up, they will insert the document that they will use to incriminate Trump into one of the boxes.  Then they will insert into the warrant the “probable cause” that justifies the home invasion.

The Espionage Act Gets An Instant Makeover, by Matt Taibbi

It would be more than a little ironic if Trump gets skewered on the same law with which he and Mike Pompeo skewered Julian Assange. From Matt Taibbi at taibbi.substack.com:

I woke this morning to find the Twitter version of a block party, over the news that Donald Trump is being investigated under the Espionage Act. A few examples:

🚨🚨 A former U.S. president is under investigation for violations of the Espionage Act. Let that sink in. 🚨🚨

For the warrant to cover the Espionage Act, there had to be PROBABLE CAUSE of espionage. Not just a “what if Trump gave classified docs to foreign agents.” There was PROOF presented to the judge — witness testimony, video footage, other documents, something. Tangible proof.

How long until Trump tries to fundraise off of potentially violating the Espionage Act?

The most mind-blowing of these tweets is by Reich, who should know better. If I were Trump, I absolutely would fundraise off being investigated under the Espionage Act. By pursuing him under this provision, the Justice Department just did Trump the mother of all favors, adding his name to a list of some of the most famous political martyrs in our history.

Maybe Reich can’t see how this will play politically, or doesn’t care, but anyone thrilled at the prospect of trying to prosecute a former president under the Espionage Act has blacked out the recent history of this law. How much does this Act suck, and shame us all? Let’s count the ways.

The Espionage Act represents the evolution of a series of laws whose purpose is/was to criminalize unauthorized use of sensitive information. I wrote this after the indictment of Assange:

These laws were written in a way that contradicted basic speech protections… There was a way to read the Espionage Act that criminalized what the Columbia Law Review back in 1973 (during the Pentagon Papers controversy) called the “mere retention” of classified material.

If you want a clear portrait of the shift in establishment thinking about this, look at the attitude of the New York Times toward its own role in the history of the Act. In 1981, on the ten year anniversary of the government charging former Daniel Ellsberg with violation of the Espionage Act for taking the “Pentagon Papers” to the Times for publication, the paper’s former attorney in that case, Floyd Abrams, wrote an editorial celebrating the episode. He said it “stiffened the spines of all journalists.”

The Attempt to Prosecute Donald Trump Is Unleashing More Than Our Political System Can Handle, by William Anderson

Secession or revolution may be right around the corner. From William Anderson at mises.org:

With the recent FBI raid on Donald Trump’s Florida home, the Democrats and the Biden administration have raised the political stakes to a level from which this country as we have known it may never return. All one can say to those that are demanding a criminal prosecution of the former president is: Be careful what you wish for; you just might get it.

Although the raid ostensibly was to see if Trump took classified documents from the White House when he left in a chaotic move in January 2021, former federal prosecutor Andrew McCarthy believes the Biden administration was again attempting to find that proverbial “smoking gun” tying Trump to the January 6 Capitol riot. Whether or not Attorney General Merrick Garland is able to grab the brass ring and prosecute Trump after yet one more fishing expedition is another story, although I doubt that any president has seen as many resources used to investigate him as has Donald Trump, but the Department of Justice has not filed charges yet. 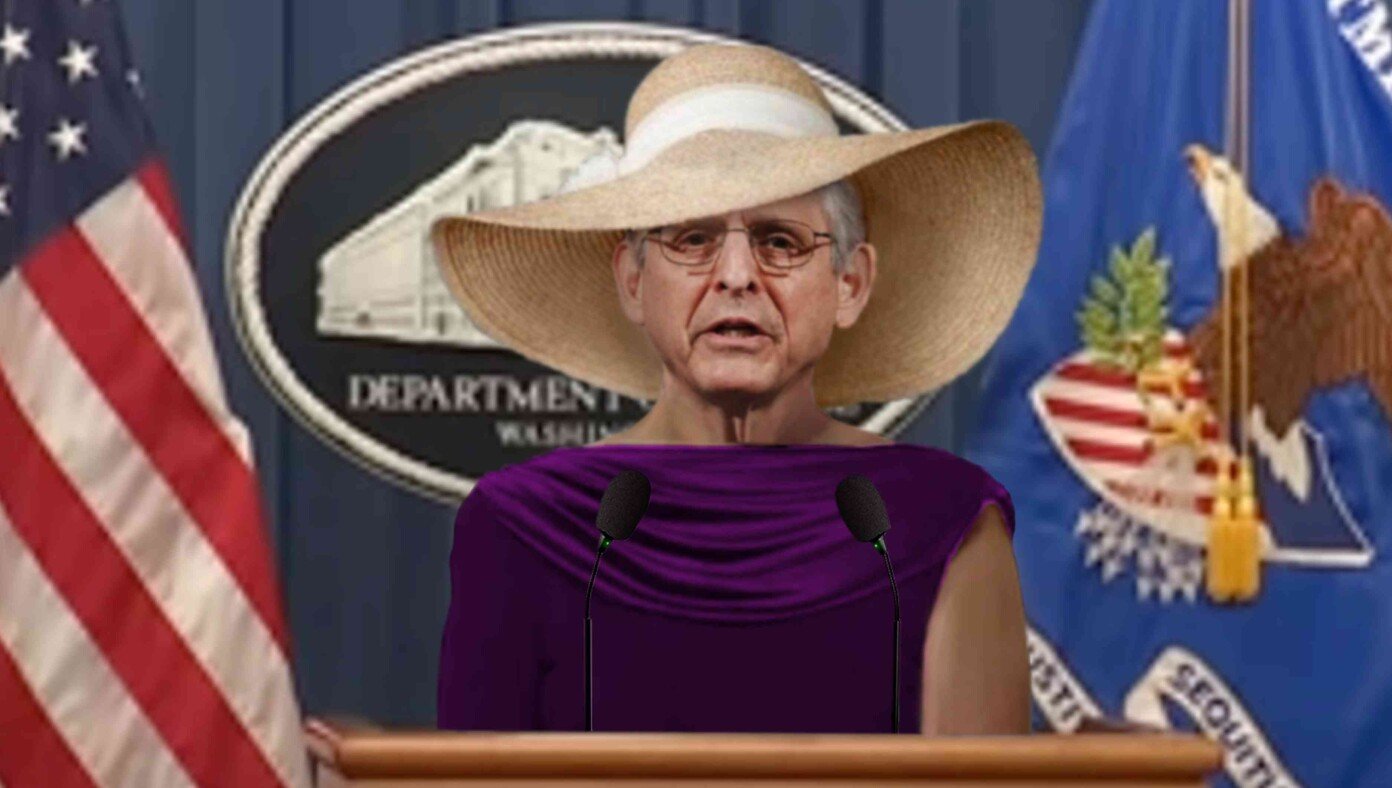 WASHINGTON, D.C. — With many Americans up in arms over the unprecedented raid of former President Trump’s residence in Mar-a-Lago by the FBI, Attorney General Garland released a statement to assure everyone the raid was completely justified. Eyewitnesses noted he looked unusually fetching in an elegant Dolce & Gabbana evening gown and a Dior sun hat.

“We wouldn’t raid Trump’s Mar-a-Lago estate or Melania’s wardrobe unless it was absolutely, 100% necessary,” said Garland. “I resent any accusation that this raid was influenced by partisan politics or my insatiable desire to wear pretty designer dresses.” The Attorney General then did a little spin in his purple gown as the press gasped with delight.

FBI Director Christopher Wray echoed the statement as he strode up to the Hoover Building in a dazzling pair of diamond-encrusted Alexander McQueen stilettos. “The men and women of the FBI are paragons of unassailable integrity and impartiality, and any suggestion otherwise is murderous treason,” he said. Several news outlets present also noted the delicious smell of Chanel No.5 in the air.

At publishing time, Trump took to Truth Social to announce that all his golf clubs were also missing.