More bad news on Covid vaccines and myocarditis in men under 40 – even as more colleges require booster shots for students, by Alex Berenson

Men under 40 have more of a risk of myocarditis from the vaccine than they do of contracting Covid. From Alex Berenson at alexberenson.substack.com:

A huge new study has found the risk of serious heart problems called myocarditis in men under 40 soars with each dose of a Covid mRNA vaccine – and is sharply higher than the risk from a coronavirus infection itself.

The findings call into sharp question the efforts by American colleges and universities to make their students receive booster shots before returning to school this January – especially since other studies have shown that the risk of post-vaccine myocarditis is concentrated not merely in men under 40 but in those aged 16-25.

For the Moderna vaccine, the risks were even higher, reaching 16-fold after the second shot. (The risk of a third Moderna shot could not be calculated because too few people received it.)

Because each Moderna shot contains 100 micrograms of mRNA, while each Pfizer shot contains 30, the findings suggest strongly that the heart risks are dose-related and likely to continue to rise with each additional shot.

Both myocarditis and pericarditas inflict long term damage to the heart, and the number of people, especially young men, who are getting it after their vaccinations is enough to merit the vaccines removal from the market. From Robert W. Malone, MD, at rwmalonemd.substack.com:

What more evidence does the USG need?

Strong data from a peer reviewed article in the journal of Clinical Infectious Disease shows that there is a significant increase in the risk of myocarditis/pericarditis following Comirnaty vaccination among Chinese male adolescents, especially after the second dose. Onset of myocarditis was a median of 2 days after vaccination. The clinically significant (acute and/or “mild”) myocarditis/pericarditis incidence rate came in at one out of every 2680 young males.

The results conclude with :

Analysis: 37.32 per 100,000 = 1 in 2680 young men with develop myocarditis/pericarditis within two weeks of their second vaccination (median time to disease: 2 days). This study was an analysis of hospital records of myocarditis/pericarditis, so did not include adolescents who may have developed the disease but did not seek medical attention.

Many pediatric cardiologists including my colleague and friend Dr. Kirk Milhoan, MD, PhD (MD board certified in pediatric cardiology, PhD. in vascular inflammation) assert that there is no such thing as “mild” myocarditis in children. Myocarditis causes heart damage. Heart damage is for life – the heart does not heal by replacing damaged cells. It scars. Scars in the heart can lead to changes in electrical conduction in heart muscle, which in turn can result in “sudden death” due to changes in heart beat regularity and muscular contraction of the heart. These events may happen at any time, particularly when the heart is stressed in some way.

A frightening new potential explanation for vaccine-driven myocarditis and other problems, by Alex Berenson

We may never know the full range of Covid-19 vaccine adverse effects or exactly what’s going on within the body to cause and promote them. From Alex Berenson at alexberenson.substack.com:

Downstream effects of the antibodies that people produce against the coronavirus spike protein may lead to myocarditis and even neurological concerns, two veteran medical researchers have written in the top medical journal in the United States.

Our immune systems produce these antibodies in response to both vaccination and natural infection with Covid. However – though the researchers do not say so explicitly, possibly because doing so would be politically untenable – spike protein antibody levels are MUCH higher following vaccination than infection. Thus the downstream response to vaccination may be more severe.

The NEJM published the short paper Wednesday in its Basic Implications of Clinical Observations series. One of the writers is an oncologist and professor at Harvard Medical School; the other is a cancer researcher who has his own lab at the University of California, Davis.

This is what has become an increasingly frequent story: a athlete in the prime of life and prime condition gets a vaccine and is hit with myocarditis, or inflammation of the heart. From Eric Peters at ericpetersautos.com:

This report is personal, almost.

My friend Jeff – mentioned in a prior report about the pressure he’s under at work to submit to the Jab – told me yesterday about one of his hard-core cycling friends who has been diagnosed with myocarditis.

Shortly after he got Jabbed, he got sick. He had been not just healthy but very healthy. Specifically, heart healthy. You have to be very heart healthy – in fantastic cardiovascular condition – in order to pedal (not ride) a bicycle competitively. Which is what this guy and guys like my buddy Jeff do. They pedal them for 50 miles straight on 90 degree days. They pedal them up grades that are challenging for most people to walk up. They do timed races.

Well, one of them still does.

My friend Jeff’s friend will probably never do it again.

What happened to my friend Jeff’s friend tracks with what is happening to other healthy young athletes who’ve been Jabbed. These include Atlanta Hawks guard Brandon Goodwin (see here) and Denver Broncos offensive guard Graham Glasgow (see here). 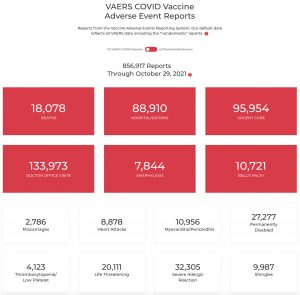 Shortly after the needle was withdrawn, he began to feel sick. His pulse began to race. It became a struggle to stand up and stay standing up. He felt exhausted for no reason.

He went back to the same people who made him sick to find out what had happened. They would not tell him why – only that he was.

Out of the blue, just like that. It just happened to have happened after he’d been Jabbed. No correlation there. Nothing to see, here.